William was born on September 6th, 1862 at Edlington near Doncaster, the 5th child of James and Mary Ackroyd

He married Mary Walker of Darrington on March 26th 1889 at St PeterÂ´s Church, Edlington. William and Mary had seven children during their marriage. They were Oswald Walter; Annie; William; Thomas Henry; Frederick; Mary and James.

William met an early death at the age of 49 in the Cadeby Pit Disaster.

At the time, we are told, that William was off work suffering from a broken toe. When he heard of an explosion at the Cadeby Colliery where he worked, William went to assist in the rescue operation.

During the rescue a second explosion occurred in which William lost his life. The explosion was so severe that William could only be identified by his belt and broken toe.

William was buried on July 14th 1912 at Conisbrough Lodge Cemetery. Other members of his family are buried with him. 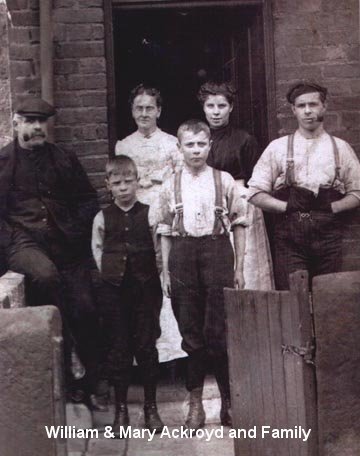 Many thanks to Carol Ackroyd for the photograph and information. The link to their family site is shown below

Soldiers – Coe, George & Ackroyd, William – Joined but not together

The Fire at Cadeby Main Colliery – Death of Another Victim – The Inquest.