Funeral of a Cadeby Hero at Wath
James Burns

The funeral took place in Wath cemetery yesterday of the remains of James Burns, a member of the Manvers Main rescue party, lost his life on Sunday last whilst assisting in the work of rescuing entombed miners from Cadeby Pit. 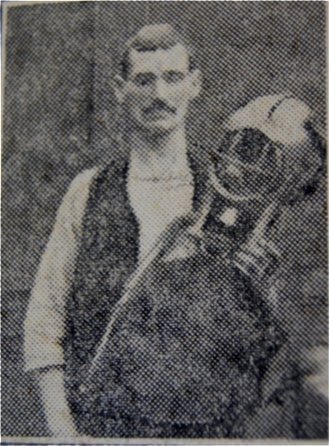 Amongst the large number of friends present were Mr A Shaw, manager of Manvers Main No 1 pit; Mr E Hampshire, and others. Members of the ambulance Brigade attended the funeral, and acontingent of the Wath territorials. The deceased was 45 years of age. The coffin was made at the Cadeby colliery and Mr WH Chambers sent a letter of condolence with the relatives, and also promised to forward an everlasting wreath.

Story Of The Accident.

The accident happened simply enough. Manvers Main and Mitchell Main were working the afternoon shift on Sunday. Denaby and Cadeby had been down in the morning, and had located the first batch of bodies, and Manvers and Mitchell had located more, bringing the total up to twelve, so that there were remaining only three unaccounted for at the time of the accident. Two teams working turn by turn, had brought two bodies out as far as the stoppings, and Manvers Main were bringing a third when Burns who was at the head of the stretcher, slipped and squeezed the air out of his breathing-bag, and Davidson, who was close by, heard him exclaim through clenched teeth : ” Look sharp ! Shout to the others !” He knew what that meant, and signalled the three at the back to go to BurnsÂ´ assistance. They did so, and Davidson at the same time set off a considerable distance in search of a signal wire. While he was away Smith, Mansbridge and Hill supported Burns, and put his mouthpiece, which had been forced out of his mouth, back again, but it was forced out once more, and this time they could not restore it, for Burns was being rapidly overcome by the gas and his teeth were clenched. So they hurried him out as quickly as they could in the direction of the stoppings, where the fresh air was, but all the time he was weakening and becoming more difficult to manage. As they were climbing over a fall of roof, he struck his head against the roof and collapsed, being unable to go any further. The other three stayed with him for a minute or two and saw that the case was hopeless. At the same time they were beset by another anxiety. Their own stock of air was nearly exhausted, and their strength was diminishing. So they decided to make a dash for safety, when a further difficulty cropped up. Hill showed signs of collapse, and Smith and Mansbridge took him between them. When about fifty yards from the stoppings Hill collapsed, and Smith, going on, almost done, managed to struggle through the doors into the fresh air while Mansbridge, who had retained complete control of his apparatus, remained with his mate, and forced the tubes into his mouth and kept them there, feeding him on pure oxygen until the Mitchell Main party came rushing up in response to DavidsonÂ´s signal. Davidson had acted quickly and coolly and but for that signal of his, four of the five would have been wiped out by the deadly gas. He, like Mansbridge, managed to retain control of his apparatus, but all were badly exhausted when the Mitchell Main party came up, and they were assisted over the remaining fifty yards of ground, and after that the Mitchell Main men went back for Burns, whom they recovered and brought outside the stoppings. Smith and Hill were brought round fairly quickly, and eventually the four of them were able to leave the pit unassisted, and were despatched to their homes in a wagonette about twelve oÂ´clock.

In the meantime, the Wath, Manvers Main, and Hickleton Main teams were waiting to go down on the night shift, and they, along with the Mitchell Main men and the officials, Mr. H.S. Witty ( manager ), Mr. S.J. Bridges ( underground manager), Mr. H. Williamson (assistant manager), and Mr. George Farmer (assistant manager at Denaby Main ), did all that was humanly possible for Burns by means of artificial respiration and the use of the pulmoters, but his case was hopeless, and when the doctor arrived he found him dead.

Anxious Crowds.
Mr. Chambers was quickly on the scene, and by his orders all rescue work was stopped for the night, and the teams which had been waiting to go down, returned home, along with the Mitchell Main team, which had just completed itÂ´s shift so gloriously.

News of the affair soon leaked out, and it was not unnatural, in view of the tragic happenings on July 9th, that it should be wildly exaggerated. It was generally reported that there had been yet another explosion, and the death toll was variously estimated from 15 to 50. As a consequence there was a rush of men to the pit yard and they would not be dispersed until Mr. Chambers, with the Vicar of Denaby, the Rev. F.S. Hawkes and the manager, Mr. Witty, addressed them and told them exactly what had happened, when they went away satisfied.

The bodies were left precisely where they were at the time of the accident, and in every case the place was marked. Poor Burns was transferred at once to the mortuary in the colliery yard.