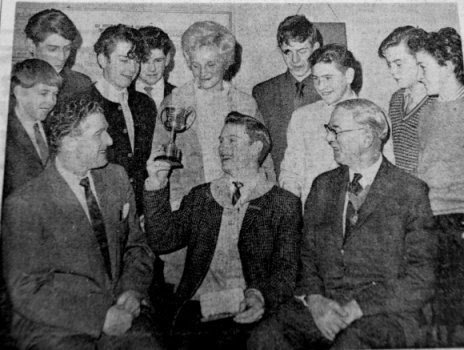 Happy smiles from the “Paper Boy of the Year,” Ian Brookes, of Conisbrough, as he receives the congratulations of the other contestants for the trophy .

The award was made at Conisbrough by Mr R Parkinson (seated left), with the president of the Mexborough and District Branch N.F.R.N.S.B., adding his own good wishes

15 years old Ian Brookes last night became “Newsboy of the Year” in the finals of the competition, organised by the Mexborough and District branch of the National Federation of Newsagents.

Ian of 32, Roberts Avenue, Conisbrough, received the “Bob Parkinson Trophy” and a wristwatch given by two firms of wholesale Newsagents, Messrs WH Smith and sons and Weston and Sons Ltd, of Sheffield.

A pupil of Swinton Comprehensive School, he was one of 22 newsboy’s and one news girl who appeared at Conisbrough Welfare Hall before a panel of judges.

Each Newsagent in the branch had selected one candidate from his news delivery force, and last night the competitors were questioned about their attitude to their work, and also on general knowledge.

Personal appearance was another factor taken into account by the judges, Mr F.C.H.Wadsworth, director of the “South Yorkshire Times” Printing Company, Mr Leslie Chew, Circulation Manager of the Sheffield “Star,” Mr Fred Weston, of Weston and Sons Ltd and Mr Will Williamson, Doncaster General Manager of WH Smith and Sons.

Ian works for Conisbrough newsagent, Mr Eric Jarvis, of Windmill Avenue. Runner up by only half a point was 15 years old Neil Peart, 15, Blythe Street, Denaby, a pupil of Conisbrough Northcliffe High School. He received a Â£1 cash prize.

Mr R Parkinson, newsagent of Queen Street, Swinton, who thought up the scheme, and gave the prizewinnerÂ´s trophy, tall. The “South Yorkshire Times,” “The idea is to brighten up the newsboy’s job and to give some incentive to the boys each year. “We hope to bring some limelight to the job,” he added.

His ideas have already started to bring results. Branch President, Mr G.R.Gibson, of Doncaster road, Denaby, said: “I think there has been a general tendency for the boys to try harder since the scheme originated a year ago, and there are certainly been an increase in keenness.”

The branch treats its new boys well, and this year for the second year in succession, the boys will be taken on a free trip to a Sheffield, and to my in January, along with a Newsagents and their wives. They will also be given free one hundredweight of sweets!