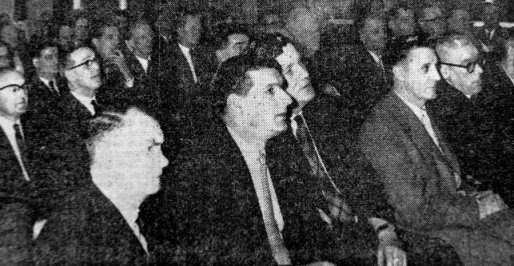 NUM delegates andguests on Saturday at the opening

“A society which can throw people onto the industrial scrappy without reference to the social consequences, is a society, we must condemn,” NCB Yorkshire Area Chairman, Mr W.H.Sales said on Saturday, when he officially open the new Â£17,000. Tom HillYouth Centre in Wadworth Street, Denaby Main.

Mr Sales was loudly applauded by the gathering, which included many officials of the NCB, the NUM and welfare organisations, after he had attacked the destructive elements in life today, and praised the efforts of men to provide social facilities such as the Tom Hill Centre.

“It gives me great pleasure to be here today, for it enables me to pay tribute not only to those whose work and effort have made this possible, but also to applaud that spirit which makes this kind of thing possible.” He said.

The building had come into being through the efforts of local and divisional welfare committees, assisted by the Ministry of Education.

Ventures of that kind, expressed the unity and the dignity of the human being.

He was always happy to be associated with the work of social welfare. He believed that in the mining industry, more and more facilities of this kind must be provided and used.

“I hope that this building will stimulate the youth of this part of the area to branch out in other forms of activity – to climb the mountains, to fish the rivers,” he added.

Mr R.Miller, chairman of the club trustees, said, “the first club had been built on the site 16 years ago. After a good many struggles, the new plans were originally conceived 10 years ago, but it was not until the last three years that plans were finalised. The original estimate for the centre was Â£9,000, but the final cost had been Â£17,000, of which the Ministry of Education had provided over Â£7,000.

President of the Yorkshire Area of the NUM, Mr Sam Bullough, said, “I am very pleased and delighted to be associated with this scheme, and this centre will bring cultural life to the young people of Conisbrough and Denaby.”

He added, “The Divisional Welfare Committee are really pleased to make a contribution to something as worthwhile as this.”

Group, manager of Denaby and Cadeby Collieries, Mr D.J.C.Macaskill, with the NUM representatives, Mr T.Wright (Cadeby) and Mr Tom Ryan (Denaby) added their thanks and appreciation for the effort of all concerned.

Mr Ryan declared, “I think the mining industry is doing more in Great Britain for welfare than any other industry.” He added, “I do think it’s a coincidence that a building of this kind is provided after only two weeks of power loading at Denaby – it’s a good start for the future.” 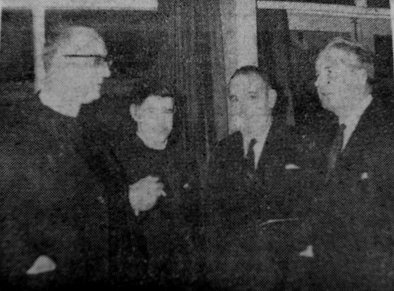 The reverent T N Evans, Vicar of Denaby, and Father A O’Kane,

pictured on Saturday at the opening of the new Tom Hill youthCentre.