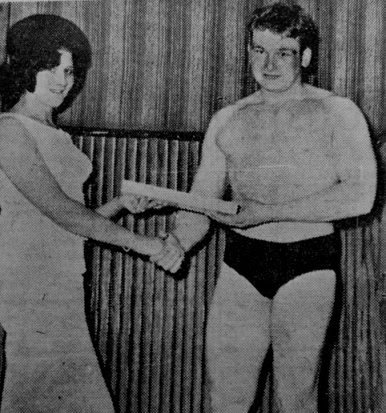 Mr Conisbrough became Mr Sheffield on the occasion of the Sheffield Orange Ball, when each of the guests had to bring an orange for the children of a local children’s hospital, but it was only by chance that David, a British railways fireman, even took part.

He told the “South Yorkshire Times” this week, “I knew nothing about the Ball or the Mr Sheffield contest until the evening it took place.

“Then the leader of Parkgate youth club, Michael Ray, told me. It was 7:30 PM when I got to know, and I was there and entered by nine o’clock,” said David.

The next step for the young Swinton muscleman is in the direction of Bradford, where New York’s to compete for the Mr West riding tightly in October.

If he does well in that contest the aim is to become Mr North East Britain, and automatically qualify to compete in the nationwide Mr Britain event

Improved Lighting on Sheffield Road – Still trying to get it “Airborne”