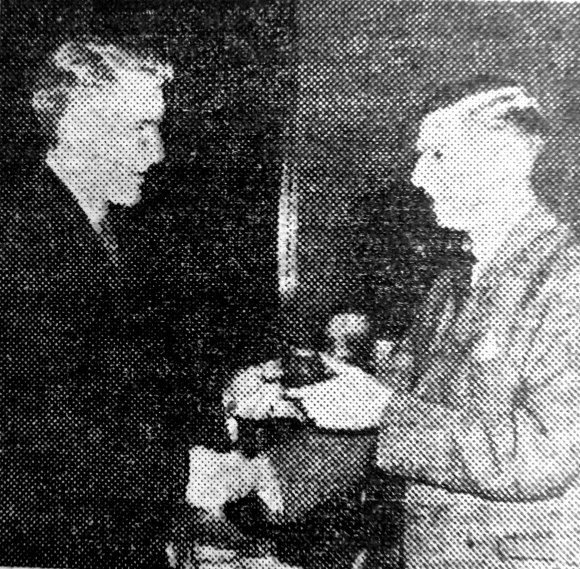 Mr N Hulley hands over the ball with which J. W. Wardle took his 100th wicket in the Yorkshire Council last season.

On Monday in the Denaby Welfare Institute the annual supper of the Denaby and Cadeby cricket club was held. The chairman Mr. W. Coles presided.

During the evening, suitably inscribed cricket balls were presented to the three of the last season’s players. They were W. Holland who scored the 137 not out against Brodsworth in the Doncaster league. R. Cory, who scored a century against Rossington in the same competition and a promising young first-team bowler John H. Wardle who received the ball with which he took his 100th Yorkshire Council wickets last season.

Mr. M. Hulley, agent at Denaby colliery made the presentations and speaking of Wardle he said everyone realises that someday in the very near future the Denaby club will lose his services. Recent press reports had warned them that the time was not far distant when Wardle would be in higher circles. He felt sure that Wardle would go on from success to success. Someone had predicted that he would be our successor to Headley Verity, who had now passed on, and Mr. Hulley felt sure that, given good health and good fortune, Wardle would not fall to rise to the occasion.

The annual meeting of the club takes place in about three week’s time when it’s hoped that the work of team building for the next season will be completed, but good progress has already been made. Porter and Wardle will again be the two main bowlers. There will be several newcomers to the batting list including R Howson (Thorncliffe) and W. Hawke (Aldwarke Park).

Wardle in Yorkshire Team against Derbyshire

Sep 26 – Three Denaby Players to keep your Eye on.