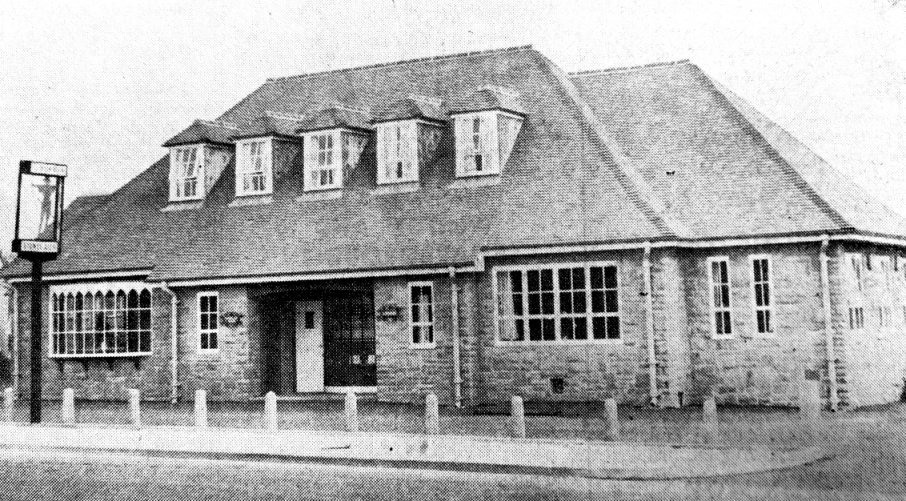 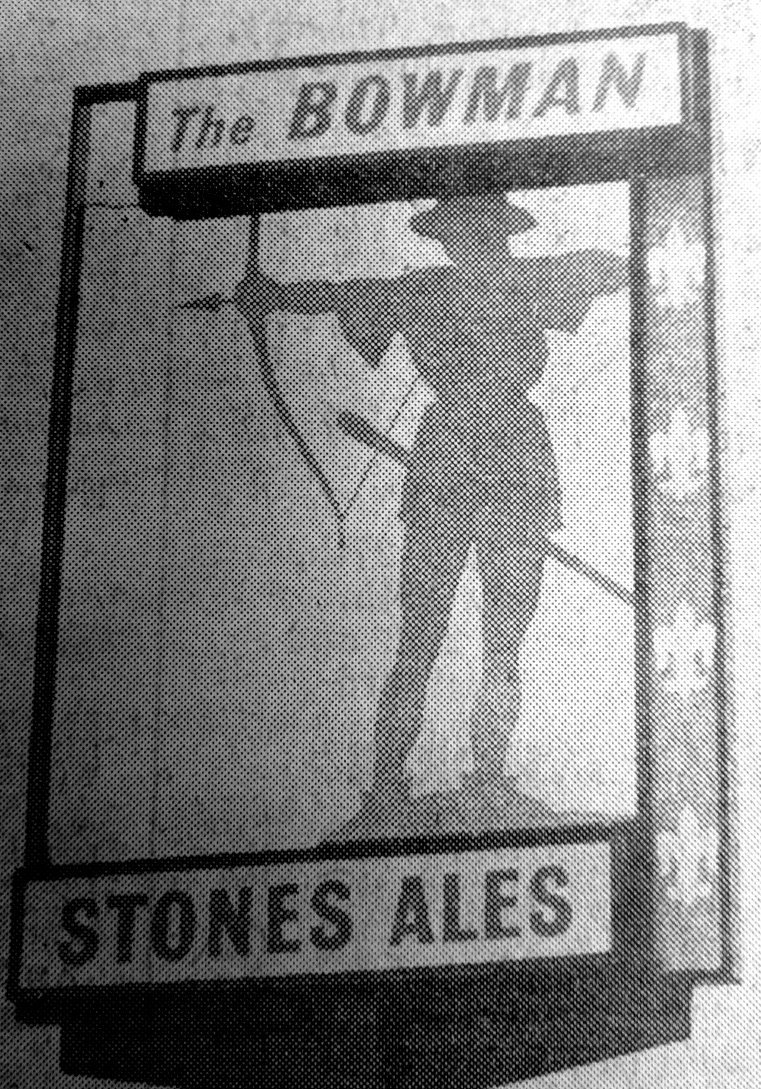 While they have contrived to link their new public house with the past of Conisbrough – and succeeded – Wm. Stones Brewery and the architects have included the most modern forms of heating, lighting and floor coverings to make the comfort of the patron complete.

The hotel, which stands in Micklebring Grove, on Conisbrough’s Ellershaw Estate, is aptly called “The Bowman”, linking up with the Castle and Ivanhoe, and named by General Manager and Director Mr. Harold Killingbeck. In the lounge the walls surrounding the bar are panelled with yew, strengthening the connection between the Bowman and Conisbrough’s history, for yew is used for making bows.

The architects, Messrs. David R. Jenkinson and Son, of Norham, Mounteney Road, Rotherham, decided upon solid six inches wide stone from Bell Hagg Quarry in Derbyshire for the exterior, which has bay windows and a general air of friendly cleanliness, while the two small rooms inside have been shaped and furnished in excellent taste.

Under the thick pile contemporary blue, black and turquoise carpet on the floor of the lounge, and the rubber floor of the public bar, there is underfloor heating which can heat a room to reasonable degree and keep the heat at that temperature for a considerable time, working effectively even when the door is open, and, of course, it has the added advantage of not marking the tasteful decorations.

In the lounge, again, the bar apron is of marble pieces and cement with ground marble mixed in, which has been laid on the floor, ground, dried and polished there.

The front of the bar has been panelled in rosewood, while the public bar is panelled in teak and ash.

Newest forms of hidden yet effective lighting have been used in both rooms, with strip lighting beneath pelmets and modern but not aggressive light fittings.

The bars have the metric dispensing system, but serve draught beer, not tanked, and there is none of the high density or ‘chemical’ beer . . . in fact, a pint’s a pint at the Bowman.

A hydraulic lift takes the empties from the bar to the cellar and brings the full ones back, and air conditioning is by extractor fans and an air intake system hidden from view. 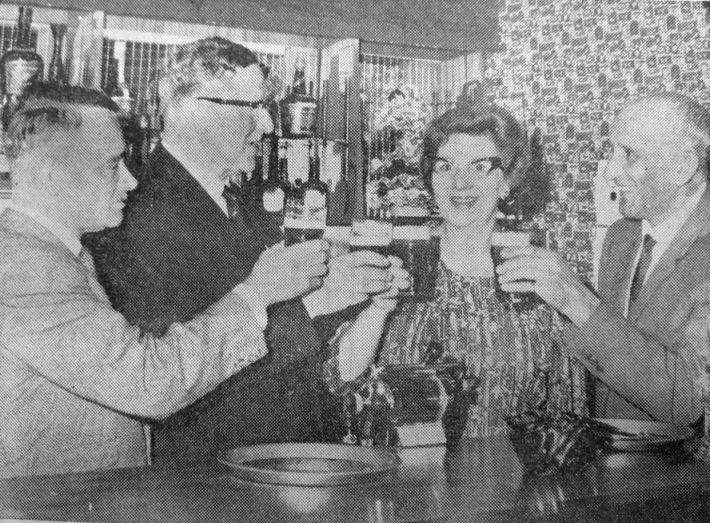 Those who want a quiet game of darts can have one with pleasure at the Bowman, in the special darts alley in the public bar – which leaves others to enjoy their Stones’ pint in safety! – and, of course, there are special tables in the public bar for those who prefer to enjoy a game of dominoes. The ‘pub’ has ‘piped’ background music, which really does stay in the background, without dominating conversation, but there will be no concerts. Mr. Killingbeck said: “Concerts are essentially a part of club life, not pub life, so we don’t compete.

At the opening of the Bowman on Monday lunchtime, six weeks ahead of schedule, Mr. Gerald Calderbank, the assistant managing director of Wm. Stones Brewery, pulled the first pint, while representatives from breweries, contractors, architects, solicitors and bar fitters, admired the tasteful décor.

Colours in the foreground in the lounge bar are blue (French navy) and light wood grain, with a veneer rather than a high varnish, while muted reds and yellows relieve the sternness of the colours. Flowers are in abundance everywhere. The actual seating arrangements are typical of the Stones style, arranged in such a way that no-one sits exactly opposite anyone else, in the lounge, at least. The bench type seat which runs round the room curves gently to provide almost an alcove, and the seats to the tables are as luxurious as the rest of the furnishings.

In the public bar the colour scheme is muted orange, greens and greys, with a mosaic tiled bar apron. The rest of the floor is rubber, but certainly does not give the appearance of being cold.

The licensee of the Bowman is Mr. Charles Henry Drabble, formerly of the Globe Inn, Howard Street, Sheffield. Hid son has now taken over the tenancy of the Globe.

Mr. Drabble and his wife have been tenants for Stones for 10 years and are delighted with the Bowman. “There is quite a difference between this and the Globe. We intend to stay here for some time,” he said.

The Drabbles have a flatlet in the dormer roof of the Bowman, with which they are very pleased, especially with the luxurious kitchen accommodation.

They are also pleased with the hidden lighting on the outside of the hotel, strip lighting concealed behind the eaves, which will be safe from the inquisitive hands – and feet – of children, as well as giving more subtle lighting to the place.

More than anything, though, they can be pleased about the size of the bar, for there is ample room for them to move about without ‘falling over each other’, and the stainless steel sinks for rinsing glasses are at the side of the two bars, leaving room for the general dash of all hands to the pumps. The sinks are surrounded by gay and sophisticated formica, well chosen to give an aura of a more expensive wall tiling. The hotel also has a pleasant off sales at the front, with a bay window, giving the impression of a small ‘old world’ shop.

The spacious car park, for those who find it is as important to park the car as it is to have that well earned break, holds about 40 cars.

If there is a demand, sandwiches will be available on request.