39-Years-Young Player Example to Many a Youngster 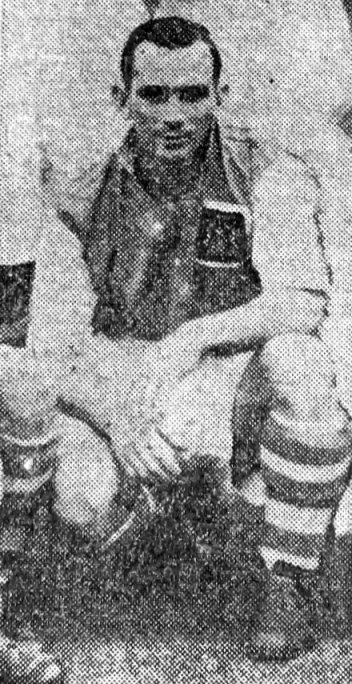 Whisper it softly . . . there is a new spirit abroad at Tickhill Square these days, and the architect of this newly-bred enthusiasm is 39 years young former Millmoor idol “Gladdy” Guest.

When the former Rotherham schemer was signed by Denaby this season, he modestly told club officials, ‘I will do my best, but don’t be afraid to tell me if I fail to come up to expectations.” Quite a statement coming from an experienced League player and it is probably true to say that the majority of former professionals would have expected the red carpet and a fanfare of trumpets to herald their arrival. But not `Gladdy” — he is quite content to be regarded as a member of the team,

Already a firm favourite at Tickhill Square, Guest can look back on a career extending over 21 years, during which he has scored over 150 goals with Rotherham United and Gainsborough Trinity.

He was the toast of the dressing room after Denaby’s F.A. cup victory at Selby.

The passing years have not taken the edge off his immaculate ball-play and precision passing, and his classic second goal at Selby showed that he is still superbly fit. Be raced on to a through ball from Slater in a lightning burst which would not have disgraced Jimmy Greaves to score from 10 yards with the Selby defence in a panic.

Training the KeyWhen you ask “bloody” how he manages to keep in condition, he will smilingly recall, “I cannot remember how many training laps and, during my career.” Perhaps that is the answer.

Present-day youngsters would do well to model themselves on this unassuming Yorkshireman will approach the game is still fresh and invigorating in the evening only of his career.

With luck and freedom from injury, guest can bring a new prosperity to Tickhill Square.

How Strong is Midland League Magic at Tickhill Square?