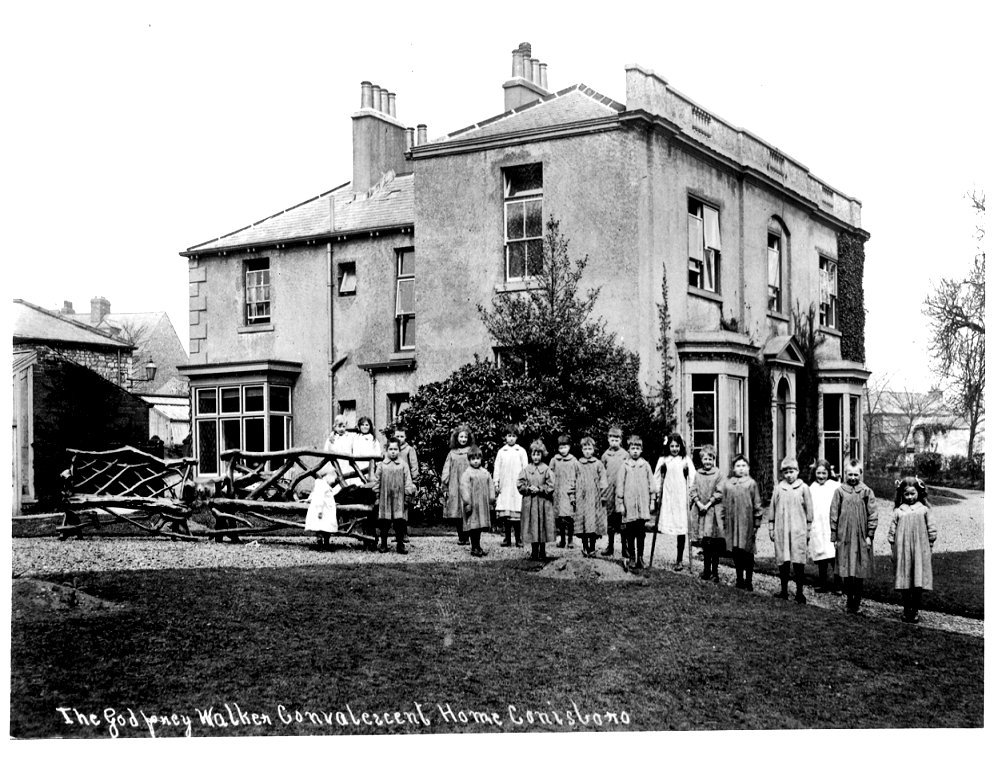 Information reaches us of a handsome gift by Mrs. Godfrey Walker, of Conisboro’, to the Sheffield Royal Infirmary.

At the quarterly meeting of the weekly board, held on Wednesday the Chairman (Mr. J. Marshall ) announced that Mrs Godfrey Walker of Northbrook Park near Exeter, had generously given to the trustees of the Sheffield Royal Infirmary, through her friend, Mr Colin M Smith, her late residence known as The Priory, Conisborough, consisting of a commodious house, with 3 1/2 acres of well laid out Gardens, and five cottages, stabling and extensive outbuildings, in memory of her late husband Mr Godfrey Walker.

The property was given to be used in connection with the Royal Infirmary as a convalescent home and with it was a cheque in £1000 to cover necessary structural alterations, furnishings, et cetera.

Mrs Walker also endowed the property in the sum of £100 per year towards its upkeep.

Mr Marshall said the home would be a valuable acquisition to the Infirmary, I will fill a long felt want. They could not speak too highly of the gift, as to how much it was appreciated by them. He had received other promises in connection with the Home, of £100 for five years, £25 for five years and £250 which made £875 in all, so they thought the work could be proceeded with at once.

It is we believe, stipulated that the money  grants shall be spent in the Conisborough district. But, Conisborough people are disappointed. They expected that Mrs Walker would guide her generosity more particularly in the direction of Conisborough, and for the exclusive benefit of Conisborough people, among whom Mr Godfrey Walker, to whose memory the case is dedicated, lived with all his life.

The Home will, of course, be an immense benefit to the people of this district, who are patients at the Infirmary, with Conisborough people as a unit of the whole.

The villagers twice missed substantial Jason Walker from. Some years ago, Mr Walker seriously considered the establishment of a Public baths in Conisborough, to be styled the Walker Baths, and the gift to the village of the cricket field, for better use as a recreation ground. But, so the story goes, the Parish Council that they worried him a good deal that the water supply to the Priory, and Miss Walker never went forward with this proposal.

Baths and a recreation ground of public boom anywhere, and would have been particularly appreciated at Conisborough.

Before Mrs Walker decided to present the Priory to the Sheffield Infirmary for use as a convalescent home, we are informed that she considered the ideal of converted into an Almshouse for the use of the age of Conisborough. But again difficulty cropped up and Conisborough failed to get the major benefit.

Mrs Walker, like her husband, has generous impulses. Early in Mrs Walker’s widowhood she made a handsome donation to a London Hospital, as throughout her six or seven years connection with Conisborough, she was very good to the poor. No deserving case for charity was sent empty away.

In his lifetime Mr Walker also gave generously, and at the time of his death he was negotiating the transfer of the site for the present Church Sunday School extension

Children’s Outgrown and Cast Off Boots and Shoes (picture)