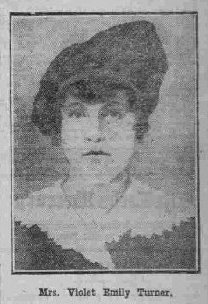 Shortly after 10 o’clock on Monday night, George Temperton (17) of Wellington Street, New Edlington, bleeding from a wound in the throat, roused Mr Leonard Harvey and Mr Charles Oswald, manager of the Conisborough Gas Works, with information that he had “done a woman in” under the viaduct at Conisborough.

He was detained, the police were called in, and on Temperton’s directions, the body of an attractive young woman of slender build and decent appearance was found by a pillar of the Viaduct, within a few feet of the river Don, with the head almost severed from the body, all of the vertebrae being intact.

The police took charge of Temperton and took him to Doncaster infirmary and the body of the woman was taken to the Castle Inn Conisborough, where it was identified on Tuesday morning as that of Violet Emily Turner (20) of 31 St Johns Road, new Edlington. She was a married woman, living apart from her husband.

The tragedy occurred late on Monday night beneath the Conisborough viaduct, on an incongruous setting for such a gruesome episode. The police found the body easily from Temperton’s direction, it was fully stretched out, face upwards. The head was almost severed from the body and a big pool of blood surrounded the head. Five feet away was a smaller pool and a few feet further, just found the corner of the buttress of the pillar were some more pools.

The ground was not trampled down, nor were there any other indication of a struggle. The pillar is within half a dozen yards of the river, 50 yards or more from the public path leading from Conisborough through Levitt Hagg to Sprotborough.

Interviewed on Tuesday morning, Mr Oswald described the incident of the previous night. “I was washing and preparing to retire for the night, when I heard knocking at the door, and found Harvey with a man. The injured man said he had done a woman in under the Viaduct. He said she was dead. He spoke with some difficulty as he had severed his wind pipe. I phoned the Conisborough Exchange and the police were sent for. My wife, who is a nursing sister of the St John Ambulance Corps, was ill but she gave me instructions, and we rendered first aid to the man. His name was on a piece of paper in his own writing as ‘George Temperton.’ He said he was 18 years old next month. He also said that the woman was a married woman living apart from her husband.

When police Sgt Hough came he searched Temperton and took a folded razor from his inside pocket. I went with the police party to the Viaduct, as directed by Temperton, and we found the body fairly easily, although we stumbled a lot, in the dark on the slippery ground. The woman was of slender build, about 5’3” in high and quite smartly dressed. Temperton was also decently dressed, and wore a collar and tie. I thought he looked a little older than 18. Temperton was quite conscious when they got him to Doncaster.”

A few splashes of blood still remained to give a hint of the occurrence, on the glass panel of the door of Mr Oswald’s house.

Temperton is said to be quite well-known in the Conisborough district. He had formerly lived there, and used to be a newsboy.

His father, Mr Joseph Temperton is a joiner at present employed on the building scheme at New Edlington and George is one of the family of four daughters and three sons. In an interview the parents stated that he had been “ keeping company” with Mrs Turner, and they had objected to it. A fortnight ago George left his job at Yorkshire Main Colliery for a better one at Rossington, and last Friday Mrs Turner went there to live with him

On Monday night George was at the home of Joseph Henry Temperton, another member of the family, untill about 9 o’clock, when he “seemed all right.” When he had gone Mr JH Temperton missed his razor from its case. The couple have been keeping company since Good Friday.

Mrs Turner, who separated from her husband in November 1924, had three children, one of whom was illegitimate. Her father Mr Fred James, was formerly a mineworker, but had been an invalid for several years. Mrs Turner is one of a family of three daughters and one son.

The inquest was opened and adjourned on Wednesday morning, in the Castle Inn, Conisborough, by the Doncaster District Coroner, Mr Frank Allen and a jury.

The Coroner outlined the facts as known, and said that the man Temperton would not be fit to be discharged from the Doncaster Infirmary, he understood for at least three weeks, and is therefore proposed to take only formal evidence of identification and adjourned until September 21 when inquest will be continue in the Cooperative Reading Room, Conisborough.

Eleanor James mother of deceased, and wife of Fred James, joiner of 31 St Johns Road, New Edlington, identified the body as that of the eldest daughter violet Emily Turner (Tracey) wife of Arthur Turner, formerly a mineworker, now with his father in a greengrocer business Pendleton, Manchester so far as she knew Arthur Turner’s present address, was 33, Lissett Street, Wick Lane, Pendleton.

At this point PS Huck announced that the man under discussion had arrived at the Castle Inn, and was later warned by the Coroner to be present when inquest was resumed.

Continuing her evidence, Mrs James said that Arthur Turner left her daughter at the beginning of November 1924, and they have not lived together since. Their daughter had since been in service, but had recently returned home for a month’s holiday, suffering from anaemia, and she was living at home at the time of the tragedy .Witness had looked after her baby while she was in service.

Deceased had three children, one of whom was illegitimate. She and her husband had never had a proper home.

When they did live together they were in rooms in Wellington Street, New Edlington. She went to our Saturday afternoon saying she was going to visit her husband to see about the maintenance of their youngest child Eric.

“I did not see her again from 2 o’clock Saturday to 9:15 PM on Monday.” said witness. When she read returned home on Monday night she gave the baby to witness and changed from a black hat and grey fur into a heavy coat and a black velvet hat. After about five minutes in the house she went out again. She did not give any explanation of where she had been or where was going. She never even said goodnight.” said witness.

Witness did not see her alive again she heard of the death of the daughter from the New Edlington Police who called 8 o’clock on Tuesday morning. “What her movements were from 2 o’clock Saturday to 9:15 PM on Monday night I do not know” said witness.

The Coroner adjourned inquest at this point.

The Viaduct Murder – A Suicide Pact – Youth Sentenced to death