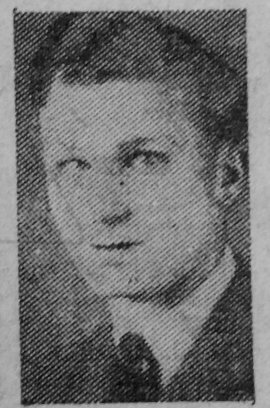 Warrant officer James Eli Foley at the age of 23 navigator of a Mosquito aircraft of Bomber Command with 64 operation sorties to his credit, has been awarded the D.F.C.. He is the younger son of Mr J Foley and the late Mrs Foley, 53 Athelstane Road Conisbrough.

Commencing operations duty in July 1942, Warwick Officer poorly completed his first tour of 30 sorties, flown in Lancaster’s in June 1943. After nine months as an instructor east arty second tour which he is present engage in Mosquito bombers.

Five weeks ago during a raid on Germany, a hit by flak rendered one engine of his plain useless, and a further hit forced the pilot, an Australian, to effect a forced landing in Belgium. Both warrant officer Foleyf, who previously had had fortunate escapes when aircraft he was flying had been hit, and the pilot, were unhurt. They spent two days in Brussels, returned to England, and took part in a further raid the same night.

A Mexborough’s Secondary School student Warrant Officer falling was employed four years before joining the RAF at the age of 20, as a clerk by Messrs Steele, Peech and Tozer limited, Rotherham. He trained in America and Canada, attaining Sgt rank. Five months ago he was promoted Warrant Officer. The raid in which he has participated include attacks on many targets in Germany and Italy.
At football, Warrant Officer Foley played centre forward for several local teams and assisted Conisbrough and Conisbrough friends at cricket.

He was a sidesman at Conisbrough Parish Church and for a time a Sunday Schoolteacher at St Andrews Mission Church. He is to be married shortly to a London girl. His elder brother Private Sydney Foley (26) joined the army a month ago.