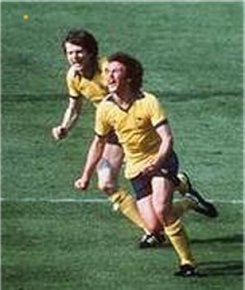 Alan Sunderland (born 1 July 1953) is an English former footballer who played in the Football League for Wolverhampton Wanderers, Arsenal and Ipswich Town. He was capped once for England.

Sunderland was born in Conisbrough, Yorkshire, and began his career at Wolverhampton Wanderers as an apprentice. He made nearly 200 appearances in total for the Midlands side, and won the 1974 League Cup and the Football League Second Division championship in the 1977 season.

In November 1977, he joined Arsenal for Â£220,000; initially a midfielder, he switched position to centre forward and became a regular, playing in the 1978 FA Cup Final, which Arsenal lost to Ipswich Town.

Sunderland’s most famous moment came in the 1979 FA Cup Final; Arsenal had gone 2-0 up against Manchester United, with goals from Brian Talbot and Frank Stapleton, and looked set for victory with only five minutes remaining. However, United scored twice in three minutes, with goals from Gordon McQueen and Sammy McIlroy, and extra time loomed. In the very last minute of the match, however, Arsenal pushed forward in a desperate counter-attack; Liam Brady fed Graham Rix on the left wing, and his cross was converted by Sunderland at the far post to make the score 3-2, and win Arsenal the cup.

Sunderland stayed at Arsenal for another five years, forming an impressive partnership with Frank Stapleton for two years; he was the club’s top scorer in 1979-80 and 1981-82, and featured in the Arsenal sides that lost the 1980 FA Cup and Cup Winners’ Cup finals.

He also won a single England cap in a 2-1 friendly win over Australia in Sydney on 31 May 1980, and also represented his country at under-21 (as an over-age player), under-23 and ‘B’ team level.

However, after a spate of injuries and the arrival of Charlie Nicholas, Sunderland found himself pushed out of the first team. He joined Ipswich Town on loan in February 1984, helped them to avoid relegation from the First Division, and made the move permanent later in the summer. He played for Ipswich until 1986, then had a brief stint at Irish club Derry City, before calling it a day. Following retirement, he opened a pub in Ipswich, before emigrating to Malta where he coached local team Birkirkara.

Miner’s Son, Alan Sunderland, Has Signed For The Wolves. (picture)

Denaby team has notched over a century of goals