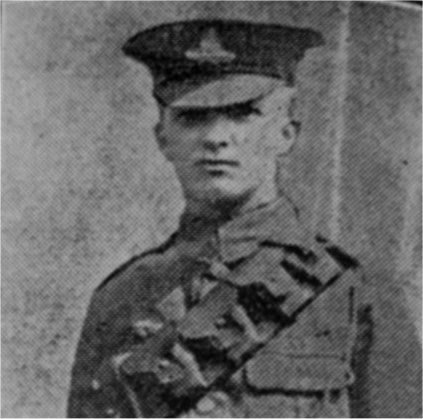 Bombardier Appleyard was in charge of a gun section, and was instantaneously killed by the bursting of a shell at the nozzle of one of the guns of his own section.

He enlisted at Christmas 1914 and was drafted to France in the first week of September 1950. He took part in two minor engagements previous to taking part in the battle of Loos, where acted as signaller, for which he held a first-class certificate.

Bombardier Appleyard was 21 years of age, and was highly admired by his comrades for his excellent qualities. He was an enthusiastic sportsman was especially fond of football and cricket, and was an old Doncaster grammar school boy, the headmastership of Mr Claxton, and was also a member of the Conisbrough Recreational Hall Club. He was a member of an old and highly respected Conisbrough family. His great grandfather was buried in Conisbrough churchyard, with military honours, after the battle of Trafalgar, 1805.

In conveying the official news to Mr Appleyard, Maj H.G.Boone says that he was killed instantaneously. He was quite the most promising young N.C.O.he had. He was always cheery atwork and an excellent and most reliable signaller, and a universal favourite with everyone.

“This he will be very bound men, and I will send you some more information later when he lies, and also some small memento of him. I am most heartily sorry, and if you will allow me to say so his loss is a very personal one to me. Will you and Mrs Appleyard please accept my deepest sympathy, and that of all the battery. We have lost a real good man and a splendid young soldier.”

A letter in similar strain has also been received from Sgt G.W.Yenson.

Son of Mr. George B. and Mrs. C. A. Appleyard, of Church St., Conisborough, Yorks.