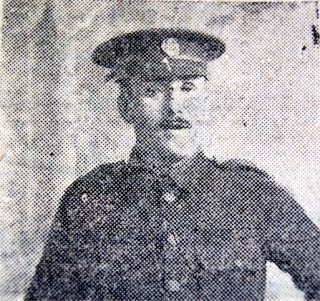 We regret to announce the death of Private Noah Armstrong, 26 Adwick Street, Denaby Main, who was killed in action on 9 August in Flanders. He had been previously wounded, but made a good recovery and returned to the fighting line. His brother-in-law Private T.H.Fisher, has written to his mother at the above address, describing how Armstrong met his death. He writes:

“On 9 August, about 1.30 in the morning, we were told to prepare to make a charge. We shelled the German trenches for half an hour, and a little later we charged the trenches, and it was not long before we were in them. The fighting was desperate, and “Jack JohnsonÂ´s,” were flying all over the place. Edwin Fisher and myself were carrying bombs from your trenches to those we had taken. I lost sight of Edwin, and was told he had been hit. I nearly went mad. I was very pleased to find him quite all right during the afternoon.

Then I heard that Noah Armstrong had been wounded in the arm, and that he had gone down in the ambulance. Subsequently, the officer told me that poor Noah have been blown up in the ambulance.
I am afraid that I shall not be able to tell any more about him. We had it hot all the time. They shelled us for 16 hours without ceasing. I am pleased to say that Edwin and I save up to now. But they do think all the young men while left ought to come out here and give as a helping hand, instead of swinging about their mother’s apron strings. Surely they have read of the Battle of Hooge. Why don’t they come forward to do their bit for their king and country? I think I have done my share. Edwin has had it hot during the two-month CLB near, but he has a brother who knows how to look after him.” Fischer concludes: “tell Betsy to cheer up (referring to poor Armstrong’s wife). I know she will be taking it hard.”