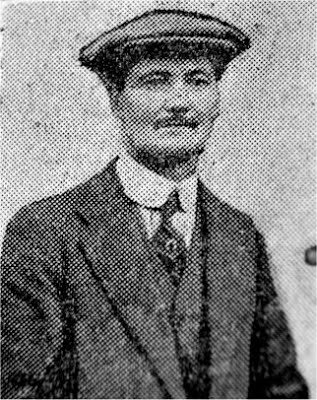 In the recent list of military distinctions occurs the following:

“His Majesty has been graciously pleased to approve of the award of the Distinguished Conduct Medal to Cpl J.M. Atkinson,1st Yorks and Lancs regiment, for conspicuous gallantry on 29th September, 1915, near Vermelles, when he crossed over 300 yards of open ground under heavy fire to bring a message and take one back to the fire trench, which had been cut off from communication by the enemy. It was due to his bravery and devotion that a support company was central to retake the trench and re-establish our line”

Cpl Atkinson was well known in this district, and was formerly in charge of the Conisbrough recruiting station in Brook square. He had completed his period of reserve as a sergeant in the East Yorks, and on the outbreak of war acceded to the request of the military authorities to act in the capacity of recruiting sergeant.

In this position at Conisbroughhe proved remarkably successful, but under the impression that he was not doing all he could, he applied for leave to go to the front. Nothing further being heard of his application he severed his connection with recruiting activities and enlisted as a private in the 1st Yorks and Lancs. He was transferred to Sunderland in December of last year, and remained there until he went to the front of 10 March.

Cpl Atkinson has had many exciting adventures, and he was slightly wounded in a few days after arriving in the firing line, being hit whilst in the support trench by a stray bullet, which necessitated him to be removed to the base hospital at Boulogne. On another occasion, immediately after the great advance around Loos, he became dispatched from his unit, and approached a trench, which he was under the impression have been captured by the Allies, he threw his arms and shouted: “English, don’t fire!” A rain of hurriedly fired bullets reminded him that the trench was in the occupation of the enemy, and that he had struck a hornets nest. He dropped to the ground, and after crawling on “all fours” for a considerable time reached safety.

He has also had the somewhat unpleasant experience of being buried by the upheaval caused by the explosion of one of the big enemy shells and of being in a trench that was blown to atoms. He was one of a party of six which was led by Lt Bates, which drove the Germans out of one of their own trenches and held it, in the face of repeated desperate onslaughts, until help arrived, for which action Lt Bates received the military Cross.

The incident which game frame the D.C.M. was a particularly heroic one. Reinforcements and ammunition were urgently needed at one part of the line, and it is believed that in the attempt to convey the message for help three men had been killed. The situation was a very desperate one, and in spite of the fate that had overtaken his comrades, Cpl Atkinson volunteered to undertake the attempt. He negotiated with safety the most dangerous part of the intervening space, and came across a party of British, and explained to them the straits of the men in the trench he had just vacated, with the result that what ammunition could be spared was sent on. Atkinson then made his way towards headquarters, but was noticed by the Germans, who treated him to a volley of rifle fire. After his inactivity, the Germans were made to believe that he had been put out of action, so he resumed his way, taking another direction. He eventually reached some of our own trenches and obtained a guide for the rest of the way. Reinforcements and the quantity of ammunition were dispatch without delay and the trench was held. It was afterwards admitted by the officer in command of that part of the line that unless help had arrived they would have been compelled to fall back, and the whole line would have been imperilled.

Cpl Acklington is well known in this district. Amongst other things he was an artist and carried out certain engagements for Messrs Nicholson, Mexborough, his artistry is even today, the subject of much admiration. His life throughout has been replete with interesting experiences and graphic adventures which it is not the good fortune of every man to enjoy.

He is a native of Dublin, Ireland, and his father was an officer in the British Army. Atkinson was left an orphan at an early age, and in one capacity or another has travelled practically the whole world. Amongst his many vicissitudes he numbers that of being in Valparaiso, South America, at the time of the great and disastrous earthquake in 1906. He joined the rank-and-file of the army in 1892 and after serving for a short time bought his discharge. After a period in New York he came back to England and rejoined his Regiment, the Yorks, at Liverpool. The greater part of his military career has been spent in India, he having been wounded there in one of the frontier engagements.

He has been spending a few days leave in Conisbrough recently, convalescing after attack of fever, the legacy of a protracted spell in the trenches. It was against his will, even then, that he was brought over to England, but the commanding officer insisted upon him having a few days leave. A short vacation from the gruelling work in the trenches has had a marked effect upon his health, and he is now practically recuperated from his illness. He left Conisbrough for his depot about a week ago.