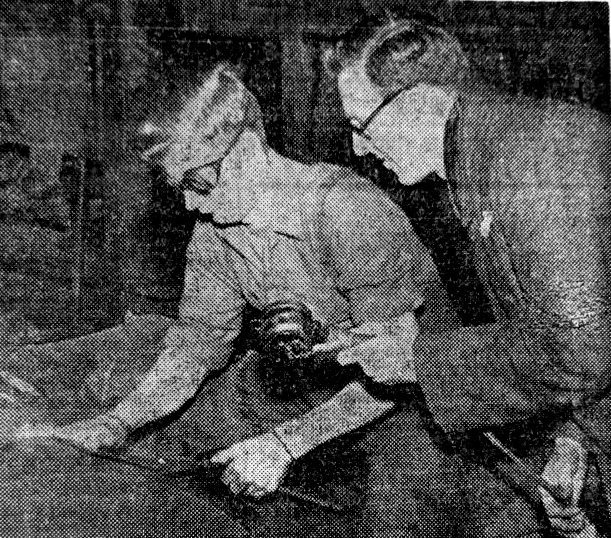 The “Mike” picks up background noise, as Roland Fox of the BBC, interviews George Mills at work at George Booth and Sons, Ltd., sickle works, at Conisbrough on Monday.

Into the works entrance of Messrs. George Booth and Sons’ Conisbrough Sickle Works on Tuesday drove a motor-car. It looked an ordinary kind of car, but looks can be deceptive.              And this was just such a case. The rear seat of the car was given over to the mysteries of a B.B.C. recording unit; the Sickle Works was to be on the air again.

In charge of the car was Roland Fox, member of the B.B.C’s news service, come to interview executive staff and employees of the only firm In the country to make the complete sickle and reaping hook and nothing else.

Mr. J. H. Rawding, Managing Director, told a ‘South Yorkshire Times’ reporter this week that in the interview. Mr. Fox recorded with him, he had mentioned that 70 per cent of the firm’s output went to export in all parts of the world, including all the hard currency countries. “I also said that during the war local boys came across our sickles in North and South Africa and in the Middle East.”

The record was taken by Mr. Fox to the B.B.C.’s studios, Manchester where the “South Yorkshire Times learned that the recording had been taken at the request of London headquarters.

This will not be the first time activities at the Sickle Works have been broadcast. Victor Smyth visited early in the war to produce a script written by Conlsbrough’s Richard Sharp, former B.B.C. war correspondent now on the home news staff.

We understand that it was on Mr. Sharp’s recommendation that this week’s broadcasting was taken.

It will be awaited with interest.