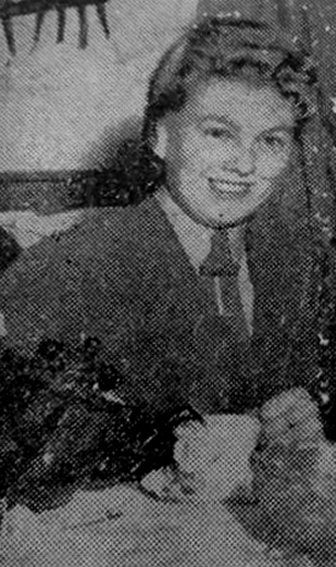 Back in Conisbrough after 18 months service with the ATF/EFI in Palestine is 24 year old NAAFI canteen assistant Irene Hammersley, with the story of Jewish hostility to British and the view that when we leave Palestine next year there will be open war between Jews and Arabs – with the Arabs victorious.

She is home on demobilisation leave, but, captivated by the life, is not accepting demobilisation and returns to her unit in Britain on December 29th in readiness for a further spell in Egypt.

There she hopes to meet her 25-years-old brother, Corporal W (Bill) Hammersley, RAF “regular” since he was 16. They have not seen each other for 2 ½ years,. Corporal “Bill” Hammersley, a fitter armourer, is stationed at Khartoum.

On Tuesday Miss Hammersley told me her experiences. “I Joined the NAAFI just over two years ago,” she said, “The munitions factory at Ranskill where I’d been working closed down and I volunteered for ATF/EFI because I wanted see a bit of life in foreign lands. I would not have missed it for the world and I do not regret going for one moment. It is interesting to see how the other side of the world lives.”

After eight weeks at RAF Station, Sandtoft, near Doncaster, Miss Hammersley left for Alexandria and Cairo (where she worked at the Empire Club. well-known “other ranks” club) and then for Palestine.

In the Holy Land Miss Hammersley has spent nearly all her time near the Jewish town of Tel Aviv. but she spent a short time in Northern Palestine at Haders, Near Haifa. Near Tel Aviv she was stationed for a while at the RAF hospital at Tel-Litwinsky 15 miles away, but principally she has been at Aqir, a RAF station 30 miles from Tel Aviv.

Members of the ATS/EFI are few in Palestine and Miss Hammersley spent her time with the WAAF. “Tel Aviv,” she said, “is a very modern town, with fine, tall buildings., but though we were so close I rarely saw the place; a week or so after I arrived the town was placed ‘out of bounds’ and, butfor short Intervals, has remained so ever since.”

She confessed that personally she had not been involved in any of the anti-British trouble, but she found the Jews hostile to the British. “When the alarm was sounded in the camp a guard was placed round the compound where we were with the WAAF’s- she explained. “We spent our time on camp at the camp cinema and the swimming pool. There were also nights at the Corporals’ Club.

“We were also allowed to go down to the beaches with the boys, but it we went out we had to have four armed escorts practically all the time I vk as there. On several occasions I went to Jerusalem. L liked it; it made you imagine you were back in the olden days. The Arabs do not seem to have altered their mode of living with the times and they seem to be happy living back in Bible times. In Jerusalem we moved about behind the barbed wire entanglements. Most of the cinemas are behind the defences and if we went outside the wire we had too about In parties.-

Miss Hammersley explained that in the Tel Aviv neighbourhood there were orange groves and vineyards. The Arabs looked after land in that area but they still shunned mechanised farming and continued to use bullocks hitched to sledges’ in their fields.

Miss Hammersley had a sidelight on the present situation and a prophecy for the immediate future. From a friend in Jerusalem she had received word that the Jews, confident that they would be given all Palestine, had been asking the British “boys” to drink with them, but now it had been decided that they were to receive only half the country they had begun again to stone War Department vehicles.

Of the future, Miss Hammersley feels that with the withdrawal of British troops war between Jew and Arab will develop. “It seems a shame for the Jews to step in and take over everything,” she added.

During her two years overseas she has met but two Conisbrough and Denaby lads; Tommy Ryder, Athelstane Road, Conisbrough, whom she met in Tel Aviv, and an airman named Goodlad, of Denaby, on the same camp as herself, but she has met and worked with her friend, Miss Frances Keywood. Annerley Street, Denaby, who joined AC’S/EFT with her.

Miss Keywood vas prevented from proceeding to the Middle East at the same time as Miss/Hainmersley because she was in hospital, but she followed in January, 1946, and has been in Palestine all the time.

“At present she is at Sarofand,” Miss Hammersley added, “but we first met in Palestine at a dance at Aqir and last April she was posted to Aqir and this enabled us to work together a short time. Frances is due home in January.”