Back To Old Home 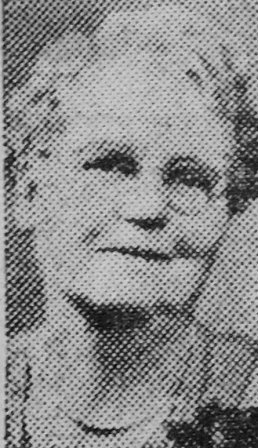 Looking very smart in a burgundy coloured two piece costume and plumed hat to tone, Mrs Alice Luther, a native of Conisbrough, looked through her rimless glasses and with a quick incisive American accent made pithy remarks to pass to a “South Yorkshire Times” representative on Thursday about the Conisbrough she knew 47 years ago before going to America with her elder brother

Mrs. Luther arrived in England on December 5th, and spent Christmas with her sister, Miss Nellie Harrop, in Doncaster. Last Wednesday she arrived in Conisbrough, and is staying with her brother, Mr. Arthur Harrop, at 165. Park Road, Conisbrough.

” You know, young man,” she said, I was born in the house that adjoins Mr. Marshall’s shop in Brooke Square. That was 62 years ago, and do you know I went into that shop to-day and I don’t think it has changed an atom since I was last in it 47 years ago.”

Speaking about Brook Square itself, Mrs. Luther was very indignant—” It’s an absolute disgrace. A few trees and a bit of grass would make all the difference in the world between ugliness and something that is presentable.’

The thing that Mrs Luther is most bitter about is the coal situation or lack of it, on the railways. “This is another disgraceful thing; for a country that produces so much coal to have none in the waiting rooms on the stations or any heat in the trains is something I cannot understand.”

Mrs. Luther has spent a week in Conisbrough, and is travelling to Scotland and other parts to see relatives and friends before boarding the Empress of France on April 12th.