The four fine looking specimens of British soldiers are all the sons of Mr and Mrs W.Barber, of 73 Braithwell Street, Denaby. 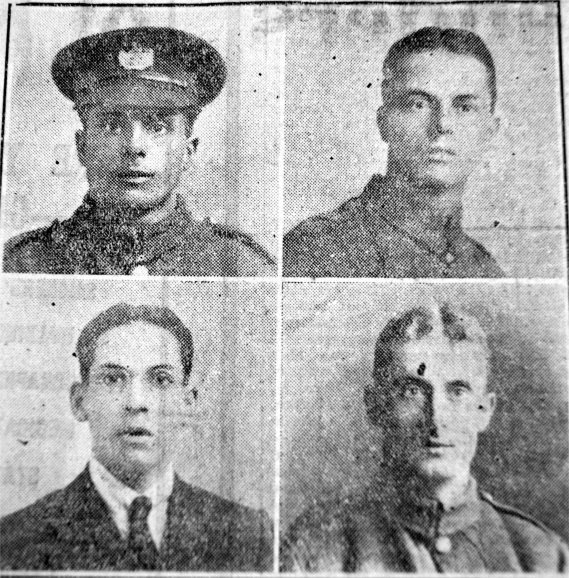 Daniel George is a sergeant in the 6th, K.O.Y.L.I. and newsis to hand that the conspicuous gallantry he displayed during the big advance, on the western trenches is not to pass unrecognised.

Frederick James, the youngest, is a member of the Y.M.C.A.staff, stationed at Luton with his Majesty’s troops.

The following is a letter written by Sgt D.G.Barber to his parents:

“Thanks so much for your parcel. It is so kind of you to send them. I wonder if you thought whilst you were packing it that I have just been through 10 days of absolute horrors. Here I am, alive and kicking, after thrice times missing death by seconds. Once there were fiveof usstood together under shellfire; one was hitand the otherfour remained untouched.

Another time I was lifted clean off my feet about 2 yards into the air. Actually, a shell burst right over me, and wounded the captain. On another occasion I got a shrapnel hole straight through the rim of my hat, and never received a scratch on my person.

My God, it was awful! Talk about war! More like hell itself. But don’t worry; I am in the best of health and spirits, and, in spite of all as happy as a sand boy.

By the way of conclusion, you might ask Pa to enclose some cigars in your next parcel.”