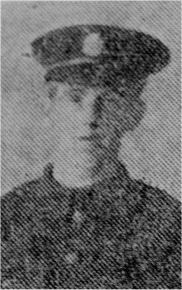 53 Maltby Street, Denaby main, was killed in action on May 27.

He was 25, enlisted in March 1915, and took part in the landing at Suvla Bay, in the following August, and also saw service in Egypt before going to France.

One officer has written to say that his death was instantaneous and he was buried the following day in the cemeterybehind the lines.:

“Always a good steady soldier, he was a general favourite all-round and will be greatly missed.”