Lance Cpl Vincent Bell (K.O.Y.L.I.) of 70 Annerley Street, Denaby main,
has been killed in action in France. He was a single man aged 36. 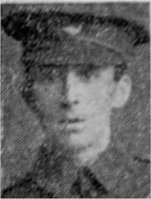 Yet another brother private Harry Bell (K.O.Y.L.I.)
has been with the Salonika forces for over a year, and previously saw service in France.

Another brother, Private William Bell, a married man with five children,
enlisted in September 1914, was severely wounded and since been discharged.