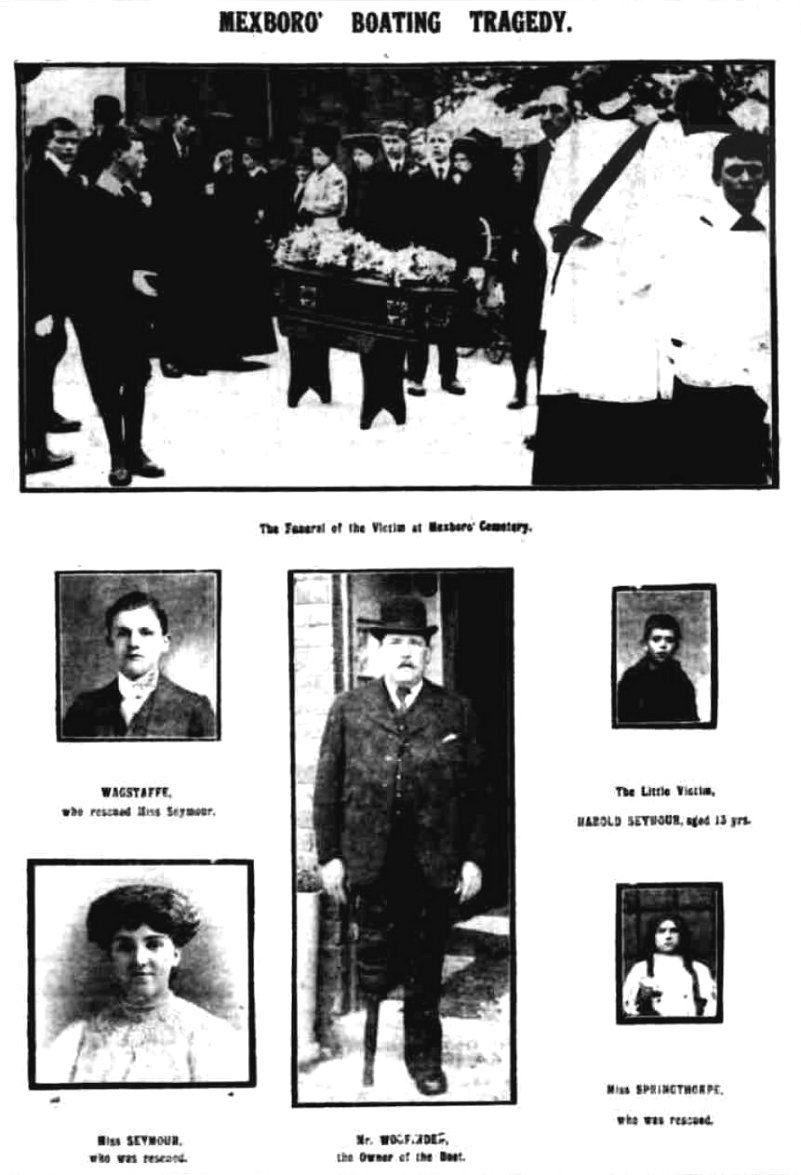 A painful sensation was created in Mexborough on Friday afternoon by a boating accident on the canal near the toll Bar Bridge, involving the death of a boy named Harold Seymour, the 14 year old son of James Seymour, of Church Street, Mexborough, a fireman employed at the Electric Lighting Station.

The boat, which was in charge of Mr Fred Woffinden, of Church Street, the well-known waterman, had as occupants, Lucy Seymour, aged 23, a dressmaker, her brother Harold, of whom Mr Woffinden was very fond; and Althea Springthorpe, aged 15, of 143 Tickhill St, Denaby Main, the daughter of a colliery deputy.

Mr Woffinden, who has never had an accident with one of his boats during the many years he has let them out on hire, was standing up in the boat to rearrange the sail, when an artificial leg which he has worn for 37 years, slipped in the bottom of the boat, throwing off his balance, and caused the boat to capsize.

All the parties, save the little lad, who does not appear to have risen to the surface at all, were rescued, and the ill-fated youngster’s body was recovered at 7 o’clock in the evening by Mr Robert Squires, an aged resident of the neighbourhood. Mr Woffinden, who made valiant efforts to save the whole party, naturally feels the matter very much, and was almost as distressed over the affair as the bereaved parents. A young fitter name Wagstaffe, of 136, Doncaster Road, showed great plug and promptitude in recovering Lucy Seymour.

The story was some what complicated on Monday at the inquest by the unlooked for intervention of a voluntary witness named Robert Prior, who claim to have been instrumental in rescuing the party. The Coroner handled a very awkward situation with his usual tact .

The inquest was held in the Primitive Methodist Institute, Mexborough, on Monday afternoon by the Deputy District Coroner, Mr J Kenyon Parker. Evidence of identification have been given by the boy’s father.

Frederick Woffinden, retired wharfman, of Church Street, Mexborough said that on Friday deceased and his sister Lucy, aged 23, and a girl of 15 named Althea Springthorpe accompanied him in one of the boats and they went for sail on the canal. The boat was about 18 feet long with a 5 foot six beam and was capable of carrying eight or 10 passengers. They were fitted with a sail. When they left the boat house it would be about 5 o’clock. The accident happened about quarter of an hour after they left the boathouse. Mr Seymour was steering and the witness was looking after the sail. He got up from his seat, and in arranging a sheet for a sail, his wooden leg slipped in the bottom of the boat, throwing him off his balance. He caught hold of the mast instinctively and tipped the boat over. They all went in the water, and were struggling there close together. He clutched the younger girl and swam with her to the side, which was no great distance.

A man came up to his assistance. He pulled off his wooden leg and went in the water in search of the boy. A young man went in and rescued Mr Seymour, who was clinging to the bottom of the boat. He then dived in after the deceased boy. Witness never saw the boy come to the surface at all. He (Mr Woffinden) had been used to boats all his life. He had had his artificial leg 37 years, and it had never slipped before.

The Coroner: It is disadvantage in the boat? – Yes.

It doesn’t make you so handy as you would be otherwise? – No, sir.

You are a goodish weight, aren’t you? –

Mr T Venables (a juror): is it usual to have a mast in the boat? – No, not usually, we just put it up to glide back from the bridge. I told the little fella we’d be like the boy with the horse; we’d walk there to ride back.

Mr Robert Squires, an aged townsmen, who recently celebrated his golden wedding, and who lives at Riversdale house in Church Street, said he heard of the accident while he was at tea, and took a boat hook to the scene of the accident, which was not far from the bottom of his garden. There were other people grappling, and he recovered the body after an hour and ½’s work, about 7 o’clock. The boy was quite dead, and he was recovered from the middle to a depth of between 10 and 20 feet.

Frederick Wagstaffe, the young man who rescued Mr Seymour, said he heard of the accident shortly after 5 o’clock near the Miners Inn, and when he got to the canal he saw Lucy Seymour clinging to the boat. He went into the water and brought her to the side.

The Coroner: Did you go in for the boy? – No, I didn’t know where to look for him.

Mr E Bullock: You went to rescue the girl pure and simple? – Yes.

Robert Edwin Prior, 21 Dolcliff Rd, Mexborough, a voluntary witness, said he saw the accident from the Toll bar Bridge. He was remarking to his companion, “Look at that boat, it will be over,” when it actually did capsize.

He went to the canal bank, and found Mr Woffinden, who had been trying to get the young girl out, struggling in the water and crying, “Lord help me; I’m done.” He rescued Mr Woffinden from the water, and then went into the assistance of the younger girl, while the young man Wagstaffe went into the assistance of Miss Seymour. She was clinging to the boat and crying “Save me,” he shouted, “Hold fast, you are all right,” and while they (he and Wagstaffe) were getting Mr Seymour out, Mr Woffinden recovered somewhat and said, “Let me get my leg off. I can swim; I will fetch them out,” he took off his leg, and went in again, when he had gone five or 6 yards he said, “I’m done,” and his hands went down. Somebody said, “Bob, get hold of him on ill drown; and he accordingly again rescued Mr Woffinden. Wagstaffe had got Miss Seymour across, and witness assisted to get onto the path. He saw nothing of the body.

The Coroner: Mr Woffinden, you don’t dispute anything of what this witness says?

Mr Woffinden: He is talking at random sir.

The Coroner: He is certainly talking a lot.

Mr Woffinden (to Prior): How far did you go in the water – Up to my neck.

Why didn’t you leave me on the bank side and go and attend to Miss Seymour? Didn’t I say, “Let me alone; I want to go for the boy?” – Yes.

Mr Woffinden: Man, you want to study what you’re talking about. You have come here with a fairytale as long as a week.

The Coroner: I don’t think it is necessary to call further evidence that the death of Harold Seymour. You will only get a lot of unnecessary detail.

The Coroner, proceeding, said the cause of the accident was quite clear. It was mainly due to the fact that Mr Woffinden and an artificial leg, which slipped when he was moving about in the boat. He was standing up in the boat at the time, which they would agree was not a prudent thing to do, particularly if one adds an artificial leg that was liable to slip.

However, they had heard Mr Woffinden assure them of his long experience with boats, and the statement that the leg had never failed him in this way before. He was quite sure that Mr Woffinden was sorry as anyone could be for what had happened. (Hear, hear.) It was a mercy that there were no more lives lost. He had no doubt the witness Prior was there and did what he could. It was not necessary to reconcile his evidence that Mr Woffinden.

A verdict of “Accidentally drowned” was returned.

Accident Mystery – Coroner’s Theory of How Injuries Were Caused.