A Conisbrough “Terrier”
An Affair of Outposts 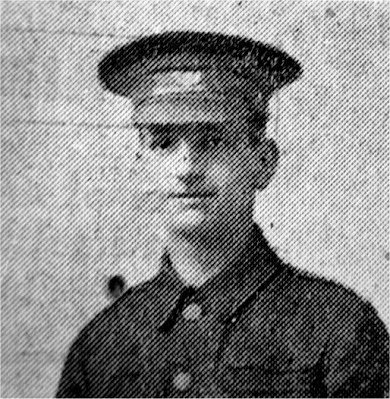 I am still in the pink and am satisfied with my present lot. We’ve had some heavy rain this time in the trenches, but it is now as hot as ever, they’ll soon be as black as a n -.

We were only all out for two days this time last, so you can guess we have not had much rest. I had been in about half an hour when a bullet went to the top of my cap. It brought the wire and left a hole for a trademark. I’m going to keep it if I can as a souvenir. Another 16th of an inch lower down, and I would have `gone west’´, but the bullet had not got my number and so I´m still smiling.

I took party out on listening patrol the next night, and we came across a German patrol. We had a dust with them and scattered them. We gave them rapidfire, which soon sent them back to their holes.

I´m writing this under a pear tree, and the Germans are just having a pop at one of our aeroplanes. I wish they´d chuck it, as it disturbs us, as we write.

However, he´s got away and they haven’t hit him. The few flowers enclosed I have just gathered 50 yards behind the firing line.