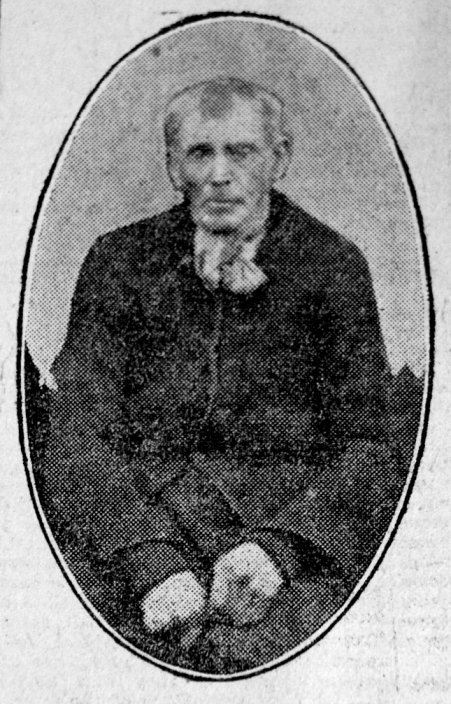 Something like a record in the matter of old age has been created at Denaby Main by JohnBrammer, who died on Sunday within sight of his 103rd year.

The centenarian, the only one so far as we can ascertain in the district has had a varied experience, and has spent the greater part of his 102 years in the district.

He was born at Dinnington, near Rotherham, in August of 1805, the year of Trafalgar. He did not stay there long, but went to Worksop and spent 20 years of his early manhood on a form this, for agriculture was then the predominant pursuit. But his attention soon turned to mining, and for the next 40 years he spent his time in and about mines, for the most part being engaged in sinking and drifting.

His labours were confined largely to the Notts coalfield, and the last pit at which he worked with Shirebrook, a few miles from Worksop. He was engaged in this arduous occupation when he had nearly completed the allotted span, when he was well on the shady side of 60, when most men are thinking to lay themselves down in peace to die.

But old Brammer and finished yet. There were 40 years of actual useful life in the. He left the mines where stonework had been a speciality and came to Yorkshire. He settled down in Rotherham, and establish a little greengrocery business, his stock in trade be a horse and cart, and a few vegetables. In the last 40 years he has covered South Yorkshire with his court (and an occasional change of horses as the old ones droptop) from end to end. He has been a most familiar figure in Rotherham, Elsecar, Tickhill and Denaby.

About eight weeks ago he visited his son at 19 Edlington St, Denaby Main, while on his rounds. Then he was seized with an illness, which resulted in death on Sunday. The old man was worn out, he was crushed by the weight of years, and senile decay have been setting in for some time past. It was perfectly marvellous that he should have kept at his business after his aged run into three figures. He was a most independent of mortals, and though he had children, grandchildren, and great grandchildren scattered all over the district, and though scores of hearths and Holmes were open to him, he plodded along steadily and silently in the lonely furrow though he was always glad to call upon members of his great family.

He was a hearty and healthy man, and strange to relate, he did not stint himself of a glass of beer. He was not by any means a teetotaller, so that abstemious habits cannot have had anything to do with his longevity.

But he was a confirmed non-smoker. He barred this the baccy absolutely. He had never enjoyed a whiff of it in his life. He had the appetite of a man in the prime of life, and but for his extremely aged appearance you would not have guessed that he was born into a country which was thrilling with exultation and the glorious news which came from Trafalgar, or that the even greater use of Wellington’s victory at Waterloo had come to him across the ploughed fields.

The photograph which we publish was taken about three months ago, gives a very good idea of what this remarkable old man was like.

Brammer had four sons, all of whom worked in the mines of the district, and a daughter. This he was the head of four generations. He was twice married, and his first wife was carrying 36 years ago by the great smallpox epidemic the second wife also predeceased him. Altogether he was a unique character. At the point of age the district cannot produce his like.

Interviewed by a correspondent, Mr J.W.Brammer, of 19 Edlington St, Denaby Main, and son of the grand old man, said that his father retained all his senses. “On Friday night,” he continued, “before I went to work, he shook hands and said, “I shan’t be with you long.” He was then very weak.

“He had been a fine fellow?” Was another question.

“Yes, he stood about 6 feet tall, and straight and thin. Of course his extreme had caused him to stoop, and he looked less than that.”

“He had been a strongman, enjoying good health?” – “Yes, he had never much to complain about on that score.”

“Was he a miner?” – “He had done coal mining, but he was by occupation the pit sinker. He helped to sing pits at Killamarsh and Heckmondwike, and was well-known in the Mexborough district.” Further questions elicited the remarkable fact that the old man’s mother lived to be quite 100 years old, though his father died of middle age.

He never smoked in his life, but you like to drink. If we wanted to get him to talk about old times he will say, “ get me a drink then,”  and when he had swallowed that he would tell us about his experiences and also what you remember that great events in the history of the country.

Four of the centenarian’s sons were killed in the Swaithe Main explosion.

“He has been too feeble to work for some time?

“Yes, we have maintained him amongst us. He talked some time ago going to the workhouse, but of course I shouldn’t allow that. We are all glad to do what we could for him. We thought a lot of one another, and I am named after him.

The coffin was of pitch pine with brass mounting and bore the inscription:

The arrangements are carried out by W Jennings, Mexborough.