Chance of a Hat Trick for Conisbrough.

A Hat Trick for Conisbrough Cricket Club in the coming season – that was the hope of Mr Herbert Foster, president of the Doncaster Cricket League and Denaby and Cadeby Cricket Club, when he spoke at the Conisbrough clubs annual dinner and dance at Denaby Baths Hall on Saturday.

After recording the victory of the Conisbrough first-team in the 1937 Second Division Final of the Doncaster League, Mr Foster remarked that this seemed to be the first time the club appeared in the Leaves records, but he added: “I think that after 12 years in the First Division this coming season is a good opportunity to achieve the hat-trick of events; playing for the first time in the new promotion and relegation system; with the new pavilion in use for the first time; and to complete the trio of events by winning the First Division Championship.

On the new pavilion, nearing completion in the place of the temporary structure, Mr Foster had said: “I hope it will be treasured and respected and pride taking in it, so that as Conisbrough becomes more and more a residential area for Doncaster and Rotherham, it will attract the new residents.”

Mr Foster spoke of the Doncaster League promotion and relegation system, which will be in operation for the coming season for the first time.

“The result of this venture is awaited with interest,” he said, adding that over the years many methods are being tried to Bracknell cricket, generally by allowing each side a set number of overs, but cricket need never be slow in its worst sense.

“Slow batting might on specific occasions be honest policy, but he thought that both captains and teams should adopt a positive attitude to the game at the outset.

Batsmen showed, said Mr Foster, bat boldly if up against negative bowling, and likewise the bowler should not let negative batting depriving of his virility. Captain should not, he said, Dean X Gate from defeat to be a cricketers first motive.

Opening his speech, Mr Foster had told the 150 guests of his long association with Conisbrough Cricket Club.

“I want to sleep more as an all-rounder tonight; not only as president of the Doncaster League, and president of Denaby and Cadeby Cricket Club, but also as a supporter and former player of Conisbrough Cricket Club,” he said.

It was pleasant to recall the events of progress and achievement in the club’s history since the days on PygottÂ´s ground, where a pitch was laid in 1891, after some very good support for the opening from.

Some very enjoyable games had taken place there, he said, and while playing on the PygottÂ´s the first team had won the Swinton and district Alliance in 1906, the Third Division of the Doncaster league in 1933, and the Second Division Championship in 1937.

Mr Foster also recalled the purchase of the present ground after the last war, when money was loaned in five pound units to be repaid, incest free, as the club raise money. About Â£500 was long, a lot of money. At that time, and therefore a reflection of the faith people had in the club. The loan was repaid in reasonable time, and said Mr Foster: “that foundation to me was one of the great achievements accomplished by Conisbrough Cricket Club.

This good work should continue he said, for the club appeared to be successfully blending the enthusiasm of its younger members with the experience of the older ones.

This in connection with this. Mr Foster referred to club treasurer Mr Harry Ellis and to Mr Bill Thompson, long associated with the Conisbrough club, and a vice president of the Doncaster League.

Of Mr Johnson. He said: “he is a highly respected by all connected with the Week, being always ready to talk and talk well of the game he loves so much.”

Miss Foster also welcome to the dinner. The assistant secretary of the Doncaster League, Mr Eric Bains and Mrs Bain. Mr Baines father, Mr OW Baines, was only the league second secretary since its foundation had held that position for 40 years.

Proposing a toast to the coroner Cricket Club, Mr Foster said: “I sincerely hope that Conisbrough will have a happy and successful season in 1964.”

The response was made by Dr D.M.Bell, a trustee of the club, who appealed to all young cricketers to keep up the traditions mentioned by Mr Foster. Dr Bell was pleased that the Doncaster League was making an effort to Bracknell cricket, which he said could be “as dull as ditchwater, as sparkling as champagne, or as intoxicating as whiskey.”

The clubs annual trophies were then presented by Dr Bell. They were.

A special presentation was made by club president, Mr A.J.Chadwick to treasurer, Mr Harry Ellis for his 40 years service to the club. “Without him we would not only have felt lost, but have been financially lost,” said Mrs Chadwick, adding: “he has been a pearl of a financial secretary.

Retorted Mr Ellis: “it has been said that you can’t keep a secret in Conisbrough. All that I can say is that this is the first I have heard of this.” 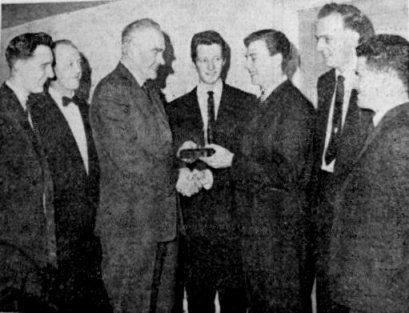 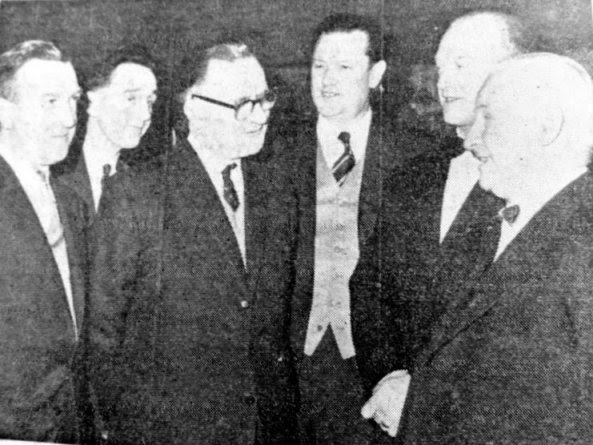 Conisbrough C.C. – All Rally Round to put Final Sparkle to Pavilion – April 1964