The Changing Face of Conisbrough and Denaby

There are over 17,000 people living in the Urban District of Conisbrough, over 6,000 less than in Dearne, slightly less than in Rawmarsh, but more than in Mexborough, Wath and Swinton.

The face of Denaby is changing drastically, with massive slum clearance programmes having already razed to the ground a good deal of the oldest and grimiest part of the village.

From the ruins of the old are springing brand new estates. A one-million-pound scheme has recently been approved to rebuild Denaby on new, exciting modern lines. 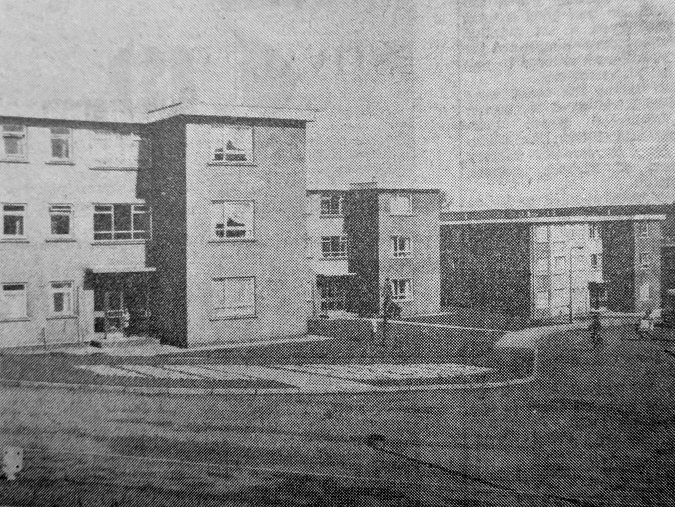 Conisbrough too is presenting a changing face to the world.  While the Castle still dominates the village, it is now flanked by the new Wellgate (picture)  and Castle Street flats. Flats and semi-detached houses in bright red brick contrast with the old white stones seen throughout the village. More flats and houses have been built at the foot of the crags.

With all these housing developments – and more to come, has the new, emerging Conisbrough Urban District been able to keep pace with provision of modern, varied shopping facilities?

Denaby certainly is rapidly losing the old image. There was a time when this little village, nestling at the foot of an enormous slag heap was known as the lake district (the miners used to work a day then’ lake’ a day!).  Now the slag heap is diminishing and the village is refreshing enough to encourage one firm to open a boutique…shades of bright, bustling, colourful Carnaby Street!  Ten years ago, it would have been incredible, now it is just catering for the village’s youth, as alive and colourful as any in the country

Denaby’s main shopping area could not be better sited.  In two long lines the shops flank the main Mexborough – Conisbrough road with no problem of parking or congestion.

This is a moot point. Congestion does not occur outside any store – but it often occurs inside, particularly in the old market or the new supermarket, where rampant crowds of bargain-hunting women thirsting for provisions are to be seen. Being a mere male, I would not know, but I have it on good authority that certain Denaby shops offer competitive prices, the like of which are not to be found for several miles around. These places are the haunts of a particular type of human being – the females who scrimp and save to make the meagre housekeeping money the hard-working men are reputed to give them last out until the end of the week.

In fact, Denaby is lacking in very little. To an outsider it probably looks like a village taken straight from the pages of D.H. Lawrence.  Indeed, film people once came to Denaby to shoot a scene for the screen version of Lawrence’s “Women in Love”. The scene was not used in the film (our house would have been in it) but the fact is that Denaby represented the typical industrial community.

Denaby has been called every name under the sun and compliments have been scarce. Now it is all changing and soon the people who have been bred from the loins of this rugged, smoke-black, chimney-stack district will have houses to live in worthy of their rich and wholesome characters.

Once, village life revolved around the pits, then Denaby was a closed community, and outsiders were looked on as intruders. Cold, forbidding eyes greeted them, though in manner, the people have always been as good and helpful as could be imagined.

This has changed now. Young people find their entertainment at Doncaster, Sheffield or Rotherham as well as at home and the winds of change have swept away a lot.

The Co-operative stores were once the backbone of the trade.  Now, for economic reasons, cut-backs have necessitated the closure of three departments and only the Hickleton Street store remains.

But if some people think of the old times and are touched with the sadness of memories, they should look to the future for solace.

Denaby is acquiring a bright new image, and when the old level crossings are scrapped in two to five years’ time, it will really be the beginning of a new era.

The new estates will be well served by the central shopping area where every conceivable article can be bought or ordered. This includes, of course, beer, wines and spirits. Conisbrough and Denaby are well to the fore in this line of commerce (thank goodness!).  Denaby once acquired the reputation of having two pits, two tips, three houses, three pubs, who is to grumble?  Denaby has nine pubs or clubs at present – so shopping for drinks gets a 5-star rating. Off hand I can think of fourteen establishments serving liquid refreshments in Conisbrough, so presumably there are no grouses there either.

Speaking of drink (as males often tend to do), my thoughts turn to dreams of the easy life, and what better to have a jar at the local and read the “South Yorkshire Times”, or perhaps a local football paper or a national horse-racing paper. Both Denaby and Conisbrough are well served by newsagent’s shops, with a good choice of periodicals and magazines to pass the leisure time.

Only last week a woman said to me” I don’t think the people who go from Conisbrough and Denaby on a shopping expedition to Mexborough realise what they are leaving behind, there isn’t a thing wrong with the shopping facilities in the two villages.”

For a long time now Denaby on Friday has been of tremendous interest to shoppers.  The reason is the market.  Where the supermarket is a sign of progress American-style, then the open-air trading market is a step into the heart of olde England.  Let’s take a walk through Denaby on a Friday, coming down the road and turning alongside the picture palace to the market area. This will bring us out in a world of laughing and joking, bustling and bartering. When the whole of Denaby and much of the surrounding area turn to English-style bargain-hunting.

Denaby market has been major shopping attraction for many a long year. A place where one can meet a representative of just about every family in the village. – if one waits long enough.

Shoppers come from all over the district to shop here, and one can buy everything from a stick of celery to a suit of clothes. It is the finishing touch to the picture of Denaby and its shopping facilities.

What other village can boast an open-air market, supermarket, concentrated shopping area with adequate parking facilities, and every conceivable type of shop providing a first-class service?

Even outside the main shopping area the populace is served by individual stores.  Certainly, neither Conisbrough nor Denaby lags behind the rest of South Yorkshire as far as shopping facilities are concerned.

The development of Conisbrough since the last war has been phenomenal.  With the Conanby estate not long built, new estates sprang up at Ellershaw, Hill Top and Clifton Hill, the Bradley Estate, the Low Road Estate, new flats at the foot of the Crags and at Wellgate.

Conisbrough is certainly moving into the seventies with a progressive outlook.  Not only is there a fine shopping centre in Church Street, with extensive recent modernisation, but also shopping centres for families living on outlying estates.

Ye olde shoppes of Ivanhoe’s time may still have a home in the magnificent surrounds of a village steeped in history, but it is inside that counts and here the service is good and the facilities excellent.  And now old and new are snuggled in what must be South Yorkshire’s most pleasant shopping centre.

Perhaps what makes Conisbrough and Denaby so attractive as shopping areas is the service.  The area is renowned for breeding men and women who are happy, friendly and willing to do a good turn for anyone.

So why should anyone leave Conisbrough or Denaby to shop?  Tradition.  That is the only reason.   The two villages have everything but big departmental stores.  Even an optician visits the chemists’ shops in the week – so everyone should be able to see their way to taking a good, long look at the facilities on offer, and realise, Conisbrough and Denaby lack nothing.

Changing Face of Don and Dearne

Changing Face Of All Saints