March Gate (see Heritage Trail 11) was once called “Codder Alley”. It is still referred to as Codder alley today by some of the older generation of Conisbrough.

Records show that this part of Conisbrough went under several forms of the same name:

These names were corrupted into Codder Alley.

Whatever the chosen name it is certain that the road was called because it was the site of a tannery and leather factory. Cod Leather, Cord Leather and Whit Leather were types of leather prepared at these works.

Whit Leather was used for making saddles and the name Cod Leather may have arisen due to the fact that one way of preparing a soft leather was to apply a mixture of equal parts of Beef Tallow and Cod liver oil.

A Codder or Cordwainer was a shoemaker. It was likely that the factory stood quite near to the Kearsley Brook and this would have been the area for preparation and washing the hides.

A trade directory of 1822 makes no mention of either tannery or tanners but gives the names of two saddlers.

The trade directory of 1876 lists the names of six shoemakers, one of whom was also the town crier.

At this time there was only one saddler and the owners of the tannery were mentioned as Gardner and Verity.

A directory dated 1867 lists seven shoemakers and one saddler so at that time the business must have been flourishing.

Mr C. Allport who was the village postmaster and a local historian wrote a book entitled” History of Conisbrough” in 1913 and this had very little to say about the tannery we can be sure it had declined by this time.

He did mention that the owner was a Mr George Walker, whose son Godfrey Walker was a well known property owner in Conisbrough and once owned the Priory Council Offices.

People who have owned the site in recent years.

Many people over the years have owned this land and the first recorded owner of the land at Codder Alley was John Lowe who took possession in 1916. John Lowe lived on High Street in Conisbrough and died on the 13th October 1921.

The piece of land was then left to his brother Alfred Lowe who sold it to Thomas Benton, a coal miner. on the 2nd April 1929. Thomas Benton also died that year.

The land then was left to Rhodes Gibbotson who sold it again to a man called Roden. Roden decided to make money for the land and raised Â£600 by making it a trust property.

On the 26th December 1929 Thomas BentonÂ´s brother Henry Benton was made a trustee for Roden. On the 12th June 1931 Henry Benton decided he was too old to be a trustee and retired.

The land was then left disusedfor quite a long time before Conisbrough Council decided to build old peoples flats.

Until the early 1950’s old stone cottages and a large orchard occupied the land. The cottages must have been there for 250 years and were still lived in up until late 1950’s. They had no running water and had to get their daily supplies of water from Kearsley Brook or from the well.

At the back of the cottages were some well tended gardens which ran parallel with the brook. Some of the people that lived there grew their own vegetables patchesand there were also pig styÂ´s and chicken runs.

These photographs and diagram were taken by a group of students from Northcliffe High School in 1970.
This includes a photo of the headless man before he lost his head! The head has been missing since 1992 when two boys from Northcliffe knocked off.
In this photo you can see the old XL crisp factory in the back ground with the chimney’s working. 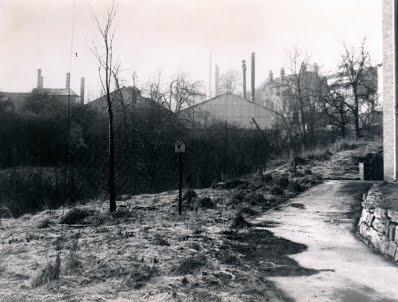