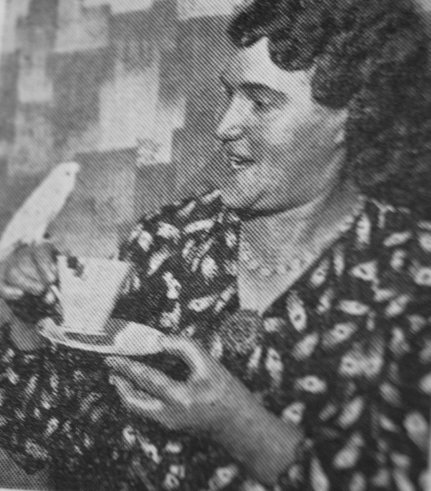 A few days ago, when a Conisborough doctor on his daily round called at the home of Mr. and Mrs. H..West, Ferry Villas, Conisborough, he informed Mrs. West that he I’d also called to see another “patient’ apart from Mrs. West’s mother. Mrs. West looked-surprised and said that they had no one else ill in the house, and after a little explanation Mrs. West accompanied the doctor into the living room.

On entering the room the doctor was greeted as follows: “Good morning, Doctor. Sammy West is very poorly and wants some, medicine.” These strange words came from a chromium bird cage in which a little cobalt blue budgerigar sat gloomily on his high perch. After attending his ordinary patient the doctor sat a few Minutes and listened to “Sammy.”

Mrs. West told a “Times” representative that the bird was first brought into the house when only six weeks old and they began to teach it to talk. It took Mrs. West about six weeks to teach the bird to say “Sammy West”, and as time marched on Sammy collected a repertoire, of aver 150 different phases, including nursery rhymes. When “Sammy” is on with his nursery rhymes he generally gets them all mixed up but never finishes until he has said each one correctly.

“Each morning when I get up to see Mr. West off to work,” said Mrs. West, “I was alWays greeted with ‘Good-Morning, Louie,’ and of course I have to reply, ‘Good morning, Sammy’ or else there is no peace. At breakfast ‘ Sammy’ always asks for a piece of bread and butter. If I offer him white bread ‘he turns away in disgust so I have to purchase a small brown loaf especially for ‘Sammy’s’ benefit. When a friend of the family drops in at night time “Sammy” always says “Kathleen (Mrs. West’s daughter) has gone to the pictures,” and then starts laughing.”

During the holiday season, Mr. West bought a neighbour’s bird into the same zoom and Mrs. West spent several days in trying to teach it to talk and in the end she gave up all attempts, but to- mend matters “Sammy” shrieked, “So you won’t talk, huh.” Those five words had only been said casually but Sammy apparently grasped ‘the situation.”

When asked if she had had any difficulty in teaching “Sammy” to talk, Mrs. West said it was quite easy. “If you get a six weeks old male bird from a good strain and train him straight away there is no difficulty, but if you one from a poor strain the task is hopeless. I have had no trouble at all with any’ I have had: I have had people call at my home from far afield to listen to my “charges” and they have left wondering, how I have managed to be successful. My husband has bred “Sammy” and nothing will induce me to part with him,” she concluded.

“Sammy,” who had been dozing in his cage, woke up just as the interview finished and springing on to his top perch he burst forth in praises of himself, saying “Sammy West is best champion in all Conisborough.” Whether he is or not it remains to be seen or heard.