An equally fitting tribute to the spirit of the Conisbrough club was paid in the friendly match, which followed, for in true sporting style the two teams flourished the bat to hit 38 fours and 15 sixes – and not one window was broken.

Fittingly, Conisbrough triumphed with 225 for six after Denaby had made 223 for eight.

For the visitors,  D Hough was top scorer with 43, including four consecutive fours, K. Swaby made 42 and Walker, 38, in an innings, which included four sixes. Of the 10 home bowlers – the visiting side later returned the compliment – D Straw (three for 41), D.A.Harrison (two for 31) and D.S.Harrison (two for 10) wreaked most damage.

Conisbrough lost their first three batsmen for 16 runs, but with the help of Straw (39), D.S.Harrison (73 not out) and M Blackman (44 not out). They went on to take the match. The later two batsmen between them hit nine of the sixes and nine of the fours. 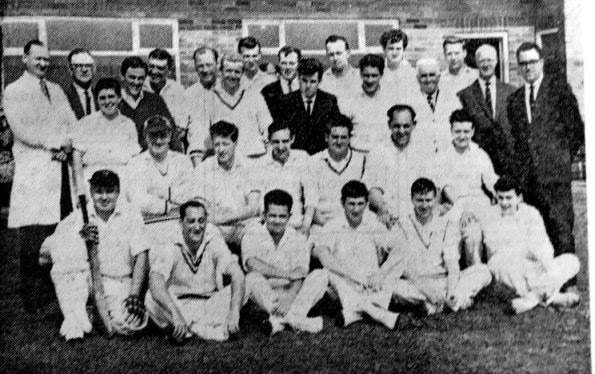 Conisbrough & Denaby C.C. players and officials pictured at the opening of the pavilion at the Park Road ground