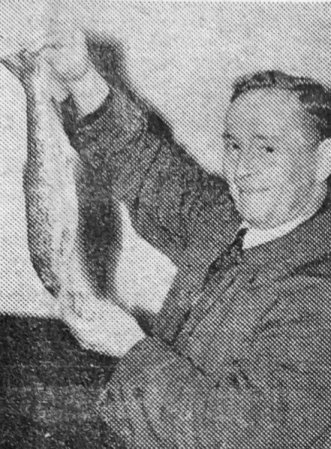 Conisbrough’s Red Lion Hotel Fishing Club, formed only a few weeks since, already believe that they may have set tip a record. It was instituted at Ferriby Sluice (Lincolnshire) on Sunday, when the club went for a day’s fishing.

Old hand Mr. Ambrose Davis, of Conisbrough, hooked a 15 inches long fish weighing 11 lb. 6 ozs., with a brown speckled back. It was a sea-trout, and none of the anglers around had ever heard of a sea trout being so far inland before. It would have had to travel up the Humber and then well up the Trent.

The trout will not grace the walls of the Red Lion, in spite of its novelty. Mr. A. W. Shikell, licensee of the hotel, Mr. Davis, and “a few of the boys” were to make a meal of it.

Lovely specimen of brown trout weighing 11b. 6oz. was caught on Sunday in Ferriby Sluice by Mr. A. Davies, of Conisbrough, a member of the Red Lion Fishing Club.

Charlie Is One Of North’s Top Anglers (picture)