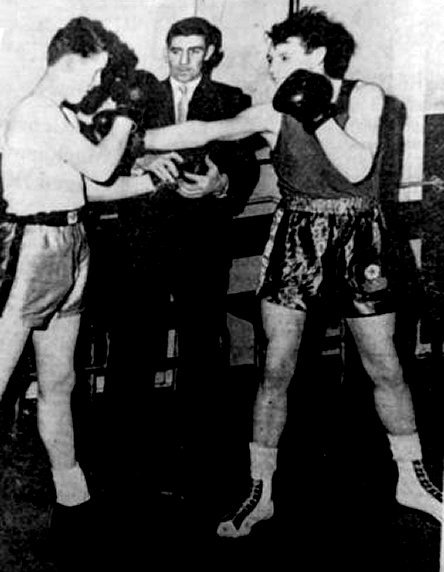 There was success and disappointment in store for two young Conisbrough boxers, who took part in the quarter-finals of the A.B.A Junior Championships at Hull on Saturday.

The scene was Hull boy’s club and the success was that of 16 years old Tommy Joyce, of Chestnut Grove, Conisbrough, who beat J.Rosie, of Denbeath A.B.C.in the nine stone “B” Class.

Rosie had the reputation of being a “tearaway” fighter, who had stopped every one of his opponent in previous rounds, but in Joyce, a member of the Doncaster Plant Works A.B.C., he met a young man with eight yearÂ´s experience behind him.

Rosie tried hard but this speedy Conisbrough lad kept up a tattoo of right leads and left crosses which had the Scot well beaten, despite a last round burst.

The disappointment came to Conisbrough’s other likely representative, Robert Pearson, of Old Road, a member of the Ellershaw A.B.C.

He met R. Brown of the Lancaster Boys Club and, conceded what must have been a very close point victory. All three rounds were close, and the third round saw Pearson get on top.

The Ellershaw lad is only in his second season of boxing and improved with every fight. Next year he would be eligible for the “B” class.

Joyce is now hoping to bring a National A.B.A. title back from London, on May 21st, and Pearson?

Well, he will no doubt continue to improve and should be in with a very good chance of success next year.

Conisbrough Boxer to represent the North.

Conisbrough Boxer to represent the North.