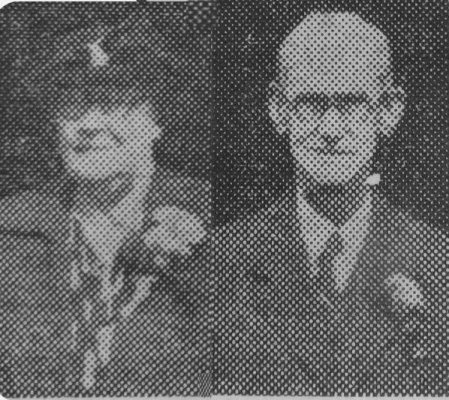 A family party was held at their home yesterday went for bridesmaids who attended the wedding 60 years ago came to offer their congratulations.

Mr Urch, now 86 years old so manages to taking an occasional walk in the village for which, over 30 years ago, he was one of those men responsible for securing Urban powers.

He was one of the people responsible for the formation of Conisbrough Old Folk’s Treat Fund (Over Seventies) and the Over Sixties club in Conisbrough.

Mr. Urch worked at Kilner Bros. glassworks in Conisbrough for nearly 40 years and was secretary of the local branch of the Glassblowers’ Association for about 20 , years. He was a member for many years and the first secretary of Conisbrough Northcliffe W.M.C.  He was also one of the founder members of the Conisbrough Independent Labour Party.

A keen church worker he was the first secretary and Conisbrough Parish Council when it was formed in 1896 and a sidesman at the church for many years. In his younger days he was also a keen footballer and played for the Kilner brothers football team and for Conisbrough.

At the age of 50 years he left the glass works and work for the Council as an inspector in the Sanitary department, for more than 20 years, retiring at the age of 73.

He was also including his activities the position of librarian at Conisbrough and was the first public librarian at the time when the library was held held in the church hall. He also acted as a part-time librarian at Denaby.

Mrs. Urch, who is 84 and is confined to her room, was not overshadowed by her husband’s work in public life for she also was a member of many public committees. She was in fact invested with a medal by the Duke of Gloucester at the age of 70 years, for her work for the St. John Ambulance Brigade and other public services and was made a Serving Sister of the S.J.A.B.

She was a member of the S.J.A.B. for 34 years. For 12 of these years she was Superintendent of the Denaby Corps and was secretary for 14 years and treasurer for 4 years.

She was also a keen church worker and a founder member of the St. Peter’s Ladies’ Guild and the Mothers’ Union and was a Sunday School teacher.

She served on the Youth Committee for Conisbrough youth clubs, on the School Board for and Mexborough and district schools committee of voluntary hospitals in Doncaster, Mexborough Conisbrough, and Denaby.

During the last war she served at a First Aid post in Conisbrough and as a member of the Women’s Voluntary Services.

She was also a member of Conisbrough Child Welfare Clinic and was a collector in the district to the R.S.P.C.C. and a member of the committee for the aid of dependants of men killed in the 1914-18 war. She is the oldest member of Conisbrough womens section of the British Legion and still manages to help this organisation by doing needlework for sale at their bazaars.

The party held yesterday was attended by Mrs. E. J. Hartley, of Conisbrough, Miss N. Edeson, of Nottinghamshire, Mrs. G. Jobb, of Humberstone and Mrs. L. Grant, of Manchester, who were bridesmaids at the wedding 60 years ago at Worksop St. John’s church.

They have a family of one son, one daughter, two grandchildren and two great-granchildren