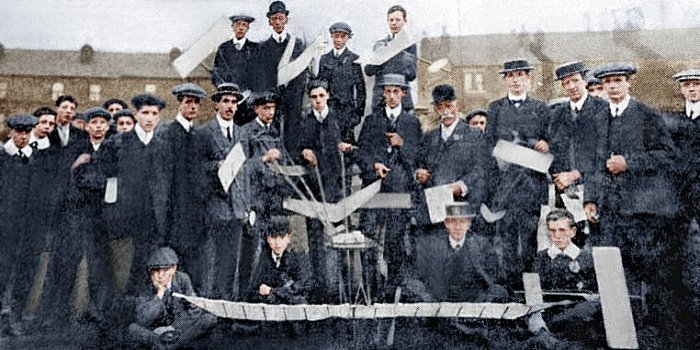 The second meeting of the Conisbrough and District Model Aeroplane Society was held in the last field on Park Road on Saturday.

The meeting was favoured with ideal weather, a good number of interested spectators praying for admission. Although there might have bee more people to witness the novel and interesting exhibitions, the project was a complete success both financially, and from an educational point of view.

The society consists, chiefly of youths and young men who obviously foresee the important part this new science is to play in the near future.

The president is Mr. John Brocklesby, and Mr. C. C. Allport is to be congratulated on the success of the enterprise. The committee, which is quite representative, consists of Mr. J. I. Webster (Conisboro’), Mr. E. Houseley (Mexborough), Mr. P. Wright (Doncaster) and the various officials.

Those who were present were treated to some capital flying; indeed, some of the circular flights were over 1000 feet in length, the models passing over Doncaster Road, a neighbouring football field, over the houses in Park Road, and thence back across the aerodrome.

The Sheffield Aero club was represented by three months, and what is probably a record set up by Mr C.W Cotterill, was model covered 236 feet in 4 1/5 seconds, which works out at a speed of 40 miles an hour. The presence of this society, Mr A.B.Kavanagh, acted as judge, in the unavoidable absence of Mr C Wightman, the secretary. A cycloplane belonging to Mr Bennett of Old Denaby was expected to give exhibition flights, but the machine came to grief during the morning through coming into contact with a stone wall and smashing its planes.

The competition for members under 17 did not take place owing to lack of entries and failing light, but the prizes will be competed for at the earliest opportunity. It is understood that a workshop is being acquired for the use of the members, and will very shortly be in use.