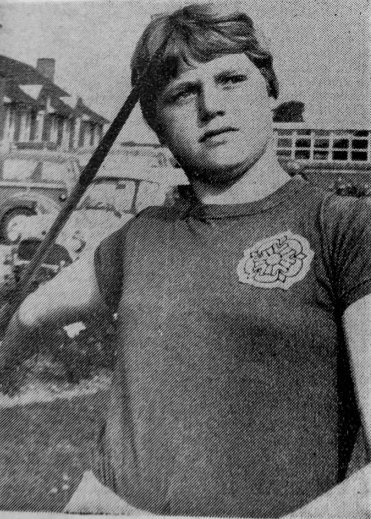 The All-England Schools’ Champion ship javelin record was broken by a Conisbrough girl at Motspur Park, Surrey, on Saturday, with a throw of 116′ 8″.

She is 14-years-old Anne Goodlad of 37 Old Mill Road, Conisbrough, a pupil at Northcliffe School, Conisbro’. Anne, said to be a born athlete by one of her teachers, began javelin throwing three — years ago, and in her first year broke the school record for her age with a throw of 70 feet six inches.

Miss C. Moody, a teacher at the school, watched Anne’s progress and made enquiries for her at Sheffield United Harriers, the club to which she now belongs. Anne trains every night on a field behind her home and at the Harriers’ training ground, and in the winter months she will be going to Carnegie College in Leeds to train on Saturdays and Sundays.

After her first school sports, Anne went on to enter other school events and won various prizes. She was successful in the Don and Dearne trials and went from there to the Yorkshire championships. After this he trained to reach the national standard required to enable her to enter for the English championships.

Her ambition now is throw the javelin for England in the Olympic Games, and also hopes one day to became a member of the Dorothy Hyman Track Club.

Anne had almost reached her limit in javelin throwing when her coach at Sheffield United Harriers, Wilf Paish, suggested to her only a month ago that she try a different way of throwing. With this new method she has increased her distance from 10 feet two inches to 10 feet eight inches.

She therefore broke her own record besides the championship record with her throw last Saturday.

The previous record was 116 feet 2 inches. She has been 5 presented with a certificate, two badges and a medal to add to her collection at home. Miss Moody said of Anne, “She is a born athlete, and apart from her prowess with the javelin she is excellent at hockey, rounders and netball. She does the shot putt, too, and while at the Don and Dearne trials she qualified for both the javelin and the shot putt, but was only allowed to enter for one event and chose the javelin.

“She has tremendous determination. Her parents back her to the hilt,” Miss Moody added.

Anne, who helps to coach the younger children in the school, wants to become a games teacher herself.

Of her feelings at Motspur Park last Saturday, she told me: “I was very nervous, but after the last throw I leapt for joy. I felt confident because my mother, who believes in horoscopes, told me it would be lucky if I wore something blue, and so I wore a blue shirt.

“My family think it marvellous, and my brother even promised me some javelin throwing shoes if I won.

“I am very grateful to the school for all they have done.”

Deputy Headmaster, Mr. R Charlton, at the school expressed how proud the school are of Anne. He says it is the first time in the school’s history that they have had anyone who has reached this high standard.