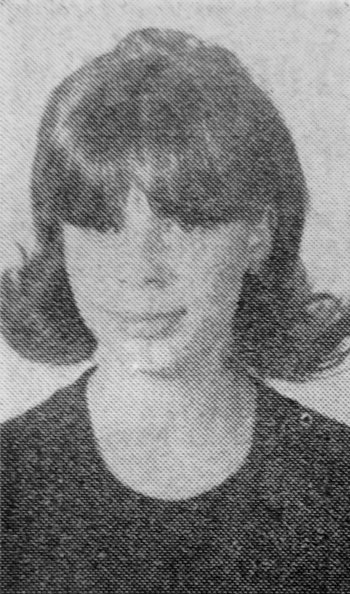 Madeleine Wright is a girl “poaching” upon a man’s world. Maggots and wet feet do not bother her, for Madeleine is an experienced angler.

She recently took part   as the only girl on a party of over 100 — in a combined Youth Clubs fishing outing to Dunham Bridge on the Trent.

As the waters swirled over the rocks, 16-years-old Madeleine, who lives at 106, Park Road, Conisbrough, cast her line with sufficient skill to rival any fisherman present. Unfortunately, the old tale of “the one that got away” applied once more. A “tidal wave” from a passing boat was the liberating force for her two catches—an unusual oversight for a girl whose fishing history dates back to the age of three.

“We used to fish at Wroot quite a lot,” said Madeleine’s father, Mr. James Wright, who is also a keen angler. “The first time we took Madeleine she was only three. We had to fasten her to a chair on the river bank. There were about half-a-dozen of us—all adults—fishing. I gave Madeleine a small rod. She beat everyone. She caught 16 fish with only one maggot and she unhooked them all herself.”

Madeleine acquired most of her skill from her elder brother, Terry, who died in 1966, at the age of 18. Mr. and Mrs. Wright opened a small angling shop for their son in Denaby, when they learned of his illness.

Following in her brother’s footsteps, Madeleine has twice entered the Don Juvenile angling match. She intends to .enter the women’s section next time.

Still a pupil at Swinton Comprehensive School, she has saved up and bought her own rod and reels.

“She is already asking me about matches,” said Mr. Wright.