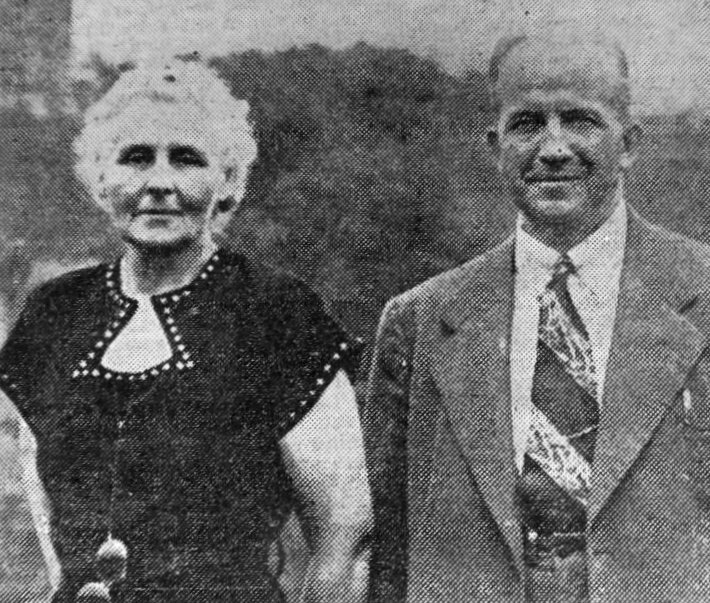 59 year old Mr Horace Kelly, Conisbrough native, back home in his birthplace this week from America for the first time for 20 years, is a man with an encyclopaedic memory. Driving along Doncaster Road, Denaby, in a car on Wednesday, he saw a man on the pavement, and without hesitation said “I know that man. He was with me on Denaby United’s management committee before I went out to the States, his name is Higgins,” it was Paddy Higgins.

47 years ago, Mr Kelly was taken by his father to his first League football match. Today he can still name without mistakes the names of both teams. “I just lived for football when I was 13” he said on Wednesday.

Mr Kelly is looking forward to an opportunity of recalling all Denaby soccer memories. He is over in Conisbrough to see his brother, Mr Ben Kelly (former Denaby United chairman) and his sister-in-law Mrs Kelly, Crookhill Road, and his sister, Mrs Taylor, and his brother-in-law, Mr Albert Taylor (former Denaby and Mexborough A there are thletic worker and still junior club official), of Bentinck Street.

He is hoping to fix up a meeting with his brother, brother-in-law and Messrs. W. Astbury, J. Hancock and Harry Mason, Denaby officials of the old days. It should be “some” soccer evening. “Ours was the day of Sam Cowan, Bussey, Bloxham, Cooper, McRae, Scriven and, just coming along, Jack Barker” Mr Kelly said.

He is accompanied by his wife, in 1911-12 a nurse at Conisbrough isolation hospital, and they had a 24-hour train journey from their home at Belvedere (75 miles from Chicago) to New York before embarking on the “Mauretania” on May 31. On arrival in England they stayed in London with Mr Kelly’s eldest sister, Mrs G. H. Smith (formerly of Daylands Avenue, Conisbrough) and at Midway, Burton on Trent, with his youngest brother, Mr G. W. Kelly, before going on to Conisbrough last Friday.

Conditions in the Old Country gave Mr Kelly a shock, but, he said: “The main impression I have obtained and which we have carried out there is that Britain has got to get more coal. Coal is the main thing, and with coal she will gradually recover and overcome her other problems.”

Housing was just as bad in the United States as it was over here, but America was in a better position because she could get lumber. This former glassworks employee with Messrs. Kilner brothers Ltd., new foreman, with 75 men working for him, for the National Sewing Machine Plant, confessed, too, that the states also had a Labour and material shortage difficulties. His plant employing 1,000 hands, were building 300 to 350 sewing machines a day, but with full production they would be turning out 1000 a day.

Mr Kelly said he found British people looking exceptionally well. “If you go into a restaurant here you can get a decent meal,” he said. “Back home you pay a high price but you do get what you want. Wages are really good and you doing not feel having to pay high prices.”

Mr Kelly has found very little change in old Conisbrough, but said: “it is quite like going into a new town at Columbia. There are a lot of new houses and it has taken me a week to get round and I have met quite a lot of my old friends.”

Mr and Mrs Kelly, who lived in Waverley Terrace, Conisbrough, before they went to America, took with them a son, John, now 29, an Army veteran and a daughter, Maureen, now 27, with a son, five years old and a daughter, six weeks old, of her own. Born to Mr and Mrs Kelly in the States have been Peter (19) and George (17), in his last year at high school.

John spent 4 ½ years in the United States Army and wanted to look up some of his old school friends in Conisbrough, but he was only in Britain a fortnight, all of which time he was on the “alert” for France. He returned home from the continent in 1945.

Mr and Mrs Kelly will be re-embarking in the “Queen Elizabeth” on June 10th, the first stage back to the home in which they have lived ever since it was built by Mr Kelly himself and two friends in eight weeks in 1913 –2 when trade was slack.

They will take with their memories of old Conisbrough in a new Britain.