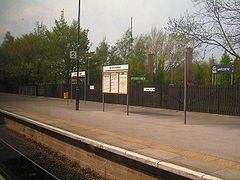 The original station was situated some 150 yards (140 m) to the east of the present station and had two sets of station buildings, one for the South Yorkshire Railway, its owners, and another for the Midland Railway , the operators of the first passenger service. Both had their own staff. This station was opened on 10 November 1849, the only station on the new line linking Doncaster and Swinton.

This was closed in 1884 with the opening of the new station, built by the Manchester, Sheffield and Lincolnshire Railway. The buildings were in that company’s “double pavilion” style and all except the former Station Master’s house, on the Sheffield bound platform, have been demolished.

Probably its most famous resident was film actor Donald Pleasence, whose father was station master in the 1940s.

In April 1993 the station received new signing as part of a general clean-up and was equipped with ramps to give disabled access to the Doncaster-bound platform. The new signs gave the spelling of the name as “Conisborough”, however, these were replaced by 21 May with the spelling corrected.

The former Earth Centre, built on the site of Cadeby Main colliery, adjoins the station and Conisbrough Castle, considered to have the finest Norman keep in the country, is a short walk away.

All services from this station are operated by Northern Rail (with exception of one daily First Trans Pennine Express Service). All services operate between Doncaster and Sheffield on a half hourly basis, one train an hour extends from Doncaster to Adwick VIA Bentley and the other extends from Doncaster to Scunthorpe VIA Thorne. An hourly extension from Sheffield operates to Lincoln VIA Worksop & Gainsborough.

Evenings and Sundays there is an hourly service towards both Sheffield and Doncaster (two-hourly to Goole).