489 Aurelius Ambrosius captured Hengist at the battle of Maesbelli and brought him to Conisbrough as a prisoner and executed him.

627 Christianity came to Camulodunum (Conisbrough) following the baptism of Edwin of Northumbria at York on the eve of Easter.

750 St Peter’s church was built as a minster church

827 Egbert came to Conisbrough when he ratified a treaty at Dore with the Northumbrians. 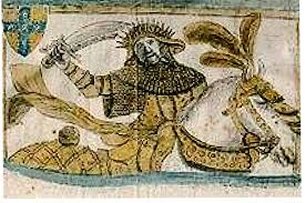 1010 Wulfric Spot (earl of Mercia) bequeathed Connigesburg in his will, and through that it eventually passed to Harold Godwinson.

1066 Harold came through Conisbrough September 28 – 29 on his way first to London and then to Hastings.

1078 The revenues of St Peter’s church were bestowed on the priory of Lewes by Earl de Warenne. 1086 Domesday survey; the manor of Conisbrough contained 28 townships.

1089 First Earl de Warenne died and was succeeded by his son, also named William. The second earl’s daughter, Ada, married Henry earl of Huntingdon, who became the king of Scotland. One of her sons was known as William the Lion, and it was he who gave Scotland its banner. His son became Alexander II of Scotland, and he married Joan of England (King John’s daughter). Alexander III married Margaret, daughter of Henry III. The second Earl de Warenne gave further land at Conisbrough and lands at Harthill, Dinnington, Braithwell, Hatfield, Fishlake, Sandal and Armthorpe to Lewes Priory.

1138 The second Earl de Warenne died and was succeeded by his son William.

1148 The third Earl de Warenne died in the Holy Land. His heir was his only daughter Isabel, who married King Stephen’s youngest son William of Blois, who took the arms of de Warenne and Surrey. 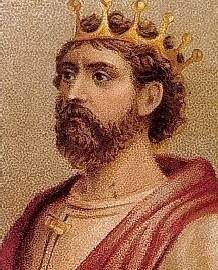 1170-1190 The present castle was built by Hamelin de Warenne (Plantagenet).

1193/4 The fifth earl was empowered, along with the earl of Norfolk, the archbishop of Canterbury and the bishop of London, to raise the ransom to free his nephew King Richard I.

1201 King John visited the castle and on 5 March gave a market charter for a market to be held one day a week (this allowed stocks to be built). 1202 The fifth earl died and was succeeded by his son William, whose first wife was Maude, daughter of the earl of Arundel. After her death he married Maude, the daughter of William Marshall of Pembroke, and after his death the king presented her with the earl marshal’s staff as hers by right.

1215 Magna Carta was signed, with Earl de Warenne principal to its ratification. 1240 The sixth earl died and was succeeded by his son John, aged 5. He was married at 12 years of age to a half-sister of King Henry III, Alice of Acquitane. The youngest daughter of Earl de Warenne married John Bailiol and became queen of Scotland.

1250 Gallows were erected at Conisbrough.

1286 The seventh earl’s son died at a tournament at Croydon. The last Earl de Warenne was born 30 June. 1296 King Edward I appointed Earl de Warenne guardian of the land (Scotland) and gave him the additional title of earl of Strathern.

1298 At the battle of Falkirk (Scotland) de Warenne led the charge with Edward I, using for the first time an army equipped with the long bow. 1304 The seventh Earl de Warenne died and was succeeded by his grandson John. 1306 The eight earl married Joan, daughter of Henry Count de Bar, on 25 May. He was 19 years old; she was 10. 1317 On 17 November Thomas earl of Lancaster attacked the castle with a large force of men, gaining entry by scaling the walls. He found only six men inside, one of whom was the miller of Conisbrough who lived at Warmsworth. Three of the other men were Thomas, Henry and William Greathead, men at arms. Earl de Warenne had taken Lancaster’s wife to Reigate Castle; they wished to divorce their respective spouses and marry each other. On 6 December the earl of Lancaster, with his constable John Lasseles, brought the six men captured to trial and found them guilty of fighting and drawing blood. They were fined sixpence each.

1319 The ferry at Conisbrough was controlled by a man known as Henry the ferryman.

1321 The earl of Lancaster held a two-day banquet in the castle. Total cost was 15s.

1322 The earl of Lancaster was captured at the battle of Boroughbridge and brought to Pontefract Castle for trial, where he was found guilty and beheaded. One of the judges was Earl de Warenne, whose castles at Conisbrough and Sandal Lancaster had seized in

1317. King Edward II spent a few days at the Conisbrough Castle and ordered 40 marks to be spent on repairs to the walls and tower.

1326 The castle and lands were given back to de Warenne by the king.

1347 The last Earl de Warenne died without legitimate heir, and the lordship of Conisbrough passed to Edward III, who passed it to his fifth son, Edmund de Langley, then aged six. He was earl of Cambridge and later became the first duke of York. Alice, sister of the last earl, married Fitzalen, earl of Arundel, and took into her marriage the title of the earl of Surrey, the coat of arms of the de Warennes and the earl marshal’s baton. (The duke of Norfolk is the premier duke with this baton and his son bears the title earl of Arundel and Surrey. The de Warenne coat of arms is included within the duke of Norfolk’s coat of arms to the present day.)

1360c Richard earl of Cambridge was born at Conisbrough Castle and was known as Richard of Conisbrough.

1392 580 deer were killed on the Great Haye, or hunting forest, of Conisbrough.

1415 Richard of Conisbrough, earl of Cambridge, and Henry, Lord Scrope of Masham, a landowner in Conisbrough manor, were executed for conspiracy against Henry V. The executions took place at Southampton on the eve of the king’s departure for France (Agincourt). Edward duke of York (elder brother of the earl of Cambridge) was killed at Agincourt. His nephew Richard earl of Cambridge succeeded to the dukedom.

1460 The duke of York fell at the battle of Wakefield with his eldest son.

1461 The former duke’s youngest son, who inherited the title, became Edward IV. He was born in

1442 at Rouen after the battle of Towton. The Conisbrough estates again passed to the Crown.

1495 The grant of the Conisbrough estates to the Crown was confirmed in perpetuity.

1526 On 12 June the manor of the priory of Lewes at Conisbrough, including lands at Braithwell, Dinnington, Harthill and Sandal, passed to John Waterhouse and his son Robert for £150.5.10 per annum. by

1560 Elizabeth I created her cousin Henry Carey first Lord Hunsdon and granted him the manor of Conisbrough.

1612 A bequest from Richard Maxwell (or Maxfield) allowed a school to be set up in Conisbrough.

1613 A further bequest from Phillip Waterhouse, combined with that of Maxwell, established a grammar school.

1630 The river Don became diminished in size to approximately present-day dimensions due to extensive drainage works in Hatfield Chase and northwest Lincolnshire carried out under the direction of Cornelius Vermuyden, the Dutch land engineer.

1649 Conisbrough played no real part in the Civil War, and only superficial damage was caused within the church. The castle, having played no part in the conflict, was allowed to remain standing.

1681 Waterhouse surrendered to the archbishop of York the advowson (right to appoint the vicar) of Conisbrough.

1694 Henry Saxton makes a further bequest for education in Conisbrough.

1774 A peal of three bells, made by Edward Hilton of Wath on Dearne, bell founder, were hung in St Peter’s church. 1776 A turnpike road was begun between Clifton Hill to Hill Top. Locks on the river Don were put in at Burcroft.

1777 A blacksmith’s shop and two cottages and stable were built at Burcroft by Walkers of Rotherham.

1778 A grinding wheel and two houses were erected, and the second Newcomen engine was installed at by Walkers of Rotherham. Joseph Walker was placed in charge at Conisbrough.

1779 Canon boring works were erected in Burcroft by Walkers of Rotherham. Eighty canon on Nelson’s ship “Victory” at the battle of Trafalgar in 1

805 were manufactured by Walkers. The artist J. M. W. Turner visited Conisbrough and made a sketch of the mill at Burcroft and surrounding buildings, including Ferry Farm and the castle.

1806-1810 The village green between the churchyard and the priory was removed. The village stocks were removed and taken to be used as gate posts. The market cross was broken up and used as building material for new boundary walls around the town centre.

1840 A brickyard opened in the castle grounds and closed in 1856. Before leaving, the owner Elizabeth Smith planted the trees that stand today in the grounds.

1841 Population of Conisbrough: 1445. The road from the Star Hotel to Swinton railway station was laid.

1843 The first post office was opened in Conisbrough by Mr Edward Harrison.

1850/1 A railway was laid from Swinton to Doncaster, and Conisbrough got its first railway station.

1863 Sheffield flood. A baby was found alive in its cradle and rescued at Conisbrough. Kilners built a glassworks at Conisbrough. A Primitive Methodist chapel was built (New Hill).

1866 St Peter’s church was restored, during which much of its ancient interior was removed and destroyed (cost: £1800).

1867 The first coal was obtained froma colliery in the area, Denaby Main. 1870 Gas works were erected at Burcroft. Gas was laid on at the Red Lion, the first building illuminated this way in the area.

The moot hall of the castle was pulled down. The courts baron and leet of the manor were held in various public houses.

The Settlement of Conisbrough

The Owner of the Manor of Conisborough claims Three Baronies. (pictures)