Conisbrough’s Rabbit with the Business Ear 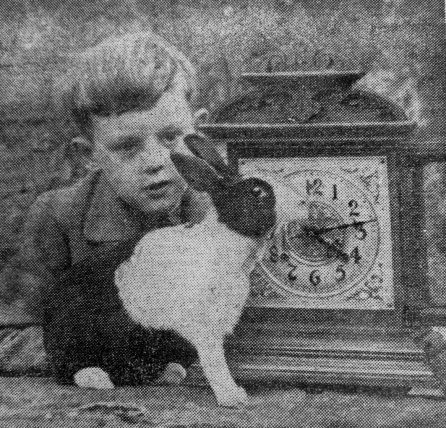 David is the seven year old younger son of Mr and Mrs HG Fenn, Church Street, Conisbrough. His black-and-white rabbit has no name but as he is David let us call his rabbit “Goliath.”

Goliath, unlike the white rabbit in Alice in Wonderland, has no waistcoat pocket or a watch of his own, but watches and clocks he likes, for visitors to Mr Fenn’s watch repairing shop in Conisbrough will, more often than not find a reflective, philosophical Goliath contentedly sitting in the shop, among the watches and the clocks.

The news of Goliath fame has spread abroad, and, burning with curiosity, I ran across the road to the shop this week and was fortunately just in time to see him pop down by the feet of his master.

Goliath cocked an ear – a business ear. It seemed – at a handsome clock on the counter.

“He is nearly 9 months old,” Mr Fenn explained. “They used to keep him outside in the yard, but when the cold weather came, just before Christmas, David brought him inside for warmth and he has got into the habit of coming into the shop and spending his time here regularly. He is quite the pet of the family.”

Goliath, a Dutch variety rabbit, can jump from the ground on to a chair, and his teeth are sharp as needles. Brought into the house as another friend (after the advent of Goliath) was a cat.

Black-and-white, too, Goliath was jealous. He niped the cat with his teeth and showed his displeasure at sharing half and shop to such an extent that the cat was only too glad to leave Goliath a clear field, and away went.

Alice’s White Rabbit was pompous – at times, I fear herself important busybody. It you really you you

David’s Black and White Rabbit as an ear for business (watch business) and NI for photographers!

Whose was the Rabbit ?