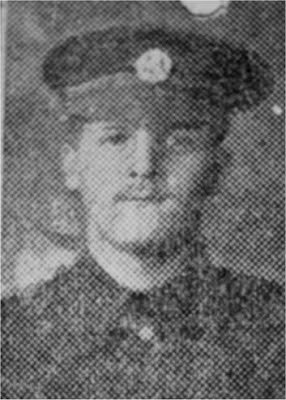 7 Cliff View, Denaby Main, who belonged to a cyclist company of the Yorks and Lancs was killed in France on March 24th.

He had been serving since August 11, 1914, and fought through the Dardanelles campaign. He went to France in 1970. He was 22 years of age, single, and before enlistment worked at Cadeby colliery.

His father has served for 2 1/2 years of the war, and was discharged last May. He had also four Uncles serving; one of them has been killed, and two wounded.

His mother has received the following message of sympathy from captain R.F.Wright;

“I should like to write you if you words to express my sympathy with you for the loss of your son.
I knew him as far back as Grantham early in 1915. Then we went out to Gallipoli. From there we came to England at different times. Last summer he was sent up again as a draft in my company.
You will see therefore that I knew him well, and will understand that when, as his company commander, I tell you what the brave man and a good soldier he was. I really know it to be true.

There is only one other man or officer here who was with me in Gallipoli, and naturally his loss is a great one to me. I only wish I could do more to express my sympathy with you. If there is any information I can give you I’m entirely at your service, and please do not hesitate to ask me.

There is only one comfort. Like many other gallant men, he died bravely at his post; he was doing his duty bravely when death came to him, and no death can be finer than that.
With all your sorrow, you can feel proud of having such a son.”

Soldier – O’Neill, Patrick – Wounded and in hospital in France (picture)