Conisbrough Soldier in the Trenches
Private A Dawson, Conisbrough 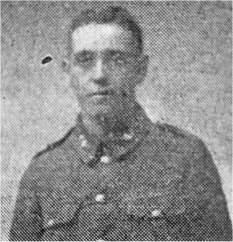 “we are having a warm time, only 175 yards from the Germans. They plough the sandbags at the top of our trenches. I am on sentry relief, and whilst writing the bullets are making the sand fly out of the bags. We have to keep very low. The Germans shelled our up trenches yesterday, but did little damage. Our guns reply to theirs, and then they send some “Jack Johnsons”

It is regrettable to see the villages which had been blown up, and churches with only the spire standing as a mark for the enemy. There is a village just behind these where not a single building remains that has not been hit with a shell of two. Our guns do great damage when they are in action. When a shell of ours dropped yesterday we heard the Germans yell!

We have not had our boots off for nine days, only to change our socks. We hear the German shouting every day, but we don’t answer very often. A Scotch Regiment is in the next trench to us, and they often chaff the Germans, and they receive some warm replies in return.

We get better food in the trenches because we cook for ourselves. I had beef and onions yesterday. When we are short of bread we are provided with biscuits. You would think it was 5 November at night with the global was flying about.

I am pleased to say I am in the pink.