Conisbrough Soldier in the Trenches
Private A Dawson, Conisbrough

“We are having a warm time, only 175 yards from the Germans. They plough the sandbags at the top of our trenches. I am on sentry relief, and whilst writing the bullets are making the sand fly out of the bags. We have to keep very low. The Germans shelled our up trenches yesterday, but did little damage. Our guns reply to theirs, and then they send some “Jack Johnsons”

It is regrettable to see the villages which had been blown up, and churches with only the spire standing as a mark for the enemy. There is a village just behind these where not a single building remains that has not been hit with a shell of two. Our guns do great damage when they are in action. When a shell of ours dropped yesterday we heard the Germans yell!

We have not had our boots off for nine days, only to change our socks. We hear the German shouting every day, but we don’t answer very often. A Scotch Regiment is in the next trench to us, and they often chaff the Germans, and they receive some warm replies in return.

We get better food in the trenches because we cook for ourselves. I had beef and onions yesterday. When we are short of bread we are provided with biscuits. You would think it was 5 November at night with the global was flying about.

I am pleased to say I am in the pink. 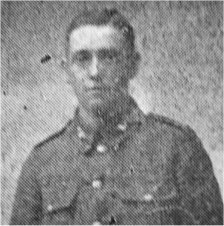 Mr and Mrs Dawson, Sheffield Road, Conisbrough, have received information that their son, Aaron Dawson, B.E.F., has been killed in the trenches. A comrades, Cpl L Calvert, says: “I am taking the place of one who is very dear. Loyal Aaron is dead. He was hit on the head by a piece of shell during a bombardment about five o’clock last Saturday, July 17th. I think it will console you to know he died almost instantly. I feel sure he suffered no pain. I feel it very much, as we were like brothers.

Now I am out of the trenches for a rest. I feel his lost, the more, as we spent our spare time together. He is buried in a soldier’s grave. He died like a true Briton. If I have a chance. I shall pay back dearly for his life.”

Herbert Wilkes, writing on behalf of all his platoon comrades, after expressing their United sympathy, states that he was well liked, and always willing to give a helping hand, and “we greatly deplore his loss. I had the painful duty of bandaging his head. It was of no avail. He died in a few minutes. He died doing his duty for his country.”

His mother received a letter from him a day previous to receiving the mournful news, stating that he was in the best of health and spirits, and he was glad to receive from her the parcel she had sent.

Soldier – Dawson, A. – Conisbrough Soldier in the Trenches (picture)