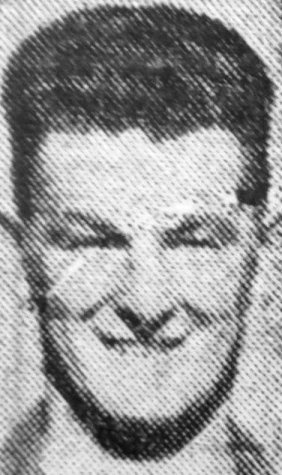 United are setting a sizzling pace in this year of grace 1951 and the sizzle reached a boil in this exciting tussle with Boston. United owed their success to the opportunism of centre-forward Platts, who got the match-winners in the 35th and 39th minutes, and to the steadiness of their defence, in which Alf Lee (picture) , notably, played a major role by his control of ex-Denaby leader, Roy Oxborough.

Anything other than cast-iron defensive play would have broken down against forwards like Delew and Bloxah—and the agile Freeman on the right wing.

Williams was sound; Lockwood, as always chasing the lions share of the hard work. McGuinness has lost none of his craft and mastery. Mayhall, like ex-Denaby man. , Hacket (in the Boston goal), was applauded time and again for excellent anticipation and agile clearances.

The “seals” of Boston’s misfortunes were left on the whitewash of Denaby’s crossbar in the second half, the marks of two rocket-propelled shots from right-half Croft and centre-half Ithell (a free kick) which fairly rattled the bar, but Oxborough missed the day’s golden opportunity when a Bloxham shot had been diverted by Mayhall, as he ran out to narrow the angle, and the Boston centre-forward, collecting the ball, shot wide of an untenanted net.

Five minutes later Platts had brought the first transformation to a particularly even game by beating the excellent Hackett, and four minutes afterwards it was, as it proved, all over. Platts adding his second goal to earn the points.

This was an excellent all-round performance meriting a much bigger crowd to see it.