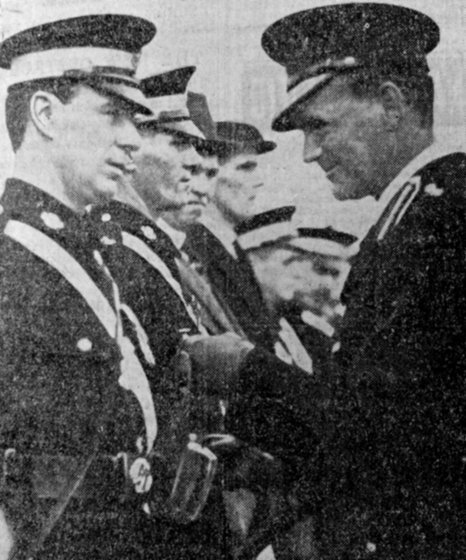 The Denaby May Ambulance Corps paraded on Sunday afternoon for the annual inspection by Assistant Commissioner H.C.Harrison.

The Corps mustered about 325, all ranks, including nursing division. The assembly was at the ambulance headquarters at Denaby Main, and from there the Corps marched to the Denaby cricket field, headed by the Denaby Ambulance Band and the Askern bugle band. A shower of rain threatened to mar the proceedings, and to force an adjournment, as was the case last year, but the sun came out and the inspection tok place under the most favourable conditions.

Although the muster was considered below the full strength of the Corps, a good many men being away for various reasons connected with the course topic, the Corps made a brave show, and greatly impressed the onlookers with their smartness and efficiency.

Following the general salute, Assistant Commissioner Harrison inspected all the divisions, all then marched past and finally formed a hollow square from within which the inspecting officer briefly address the Court.

Assisting Commissioner Harrison said he was very pleased to see such a good turnout of these old Corps, especially under such adverse conditions. He had been greatly impressed with the way in which they had carried through the ceremony. They were a credit to themselves and the officers commanding them. He was also pleased to see, in addition to many old familiar faces, quite a number of recruits, and York the Core will be continually reinforced by people likely to become useful members. He personally was very proud of the Denaby Main Corps, which was one of the best in the district, and he hoped it would maintain the high tradition established in the time of Mr WH Chambers, its founder.

The Assistant Commissioner added a special word of commendation for the nursing division, and said the nurses marched past was extremely well done.

The Corps then advanced in review order and at the conclusion of an interesting afternoon’s work, marched back to headquarters.