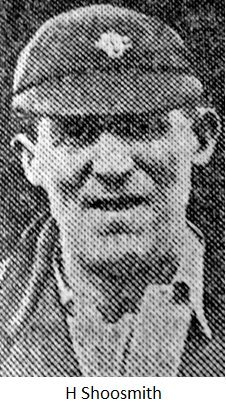 Denaby on Saturday demonstrated their real strength. Having failed so many times to force a victory, it was it was refreshing to see such a fine termination to a wonderful season. Only a few minutes to go Bentley had three wickets to fall. They fell, and it was mainly due to the steadiness of Shoosmith’s bowling that Denaby won. He bowled 14 overs and four balls for 12 runs 4 wickets. The batsmen were allowed no liberties and rarely had Shoosmith bowled better.

Opening without Greenwood – on holiday – Tibbles left at four and three wickets had gone by the time 40 runs were scored. It was again fortunate for Denaby that the veterans stepped into the breach. Carlin and Robinson put on 63 before Carlin went. J. Robinson gave support and those 3 got 106 of the 162 runs. Bower did the early damage and when he was rested Denaby took hold of the bowling. Both Robinsons hit sixes and played delightful innings. Bower took six wickets for 32 runs.

It took Bentley a long time to get off the mark and Denaby were lucky to get Capstick run out at 21. After a further success Wildgoose and Meakin threatened to pull the game round but Shoosmith broke up the combination at 84. The fourth, fifth and six wickets soon fell and Denaby’s hopes rose till J. W. Chambers set about the ball. But he could get no one to stay with him. When White was caught very little time remained but Bower fell to the first ball he received.