The annual meeting was held at Denaby Main Hotel on Friday evening, when Mr. Charles Bury (captain) presided over a good attendance of members. The minutes of the last annual meeting having been read, the Chairman called upon Mr. Fisher (secretary) to read his report.

Before doing so, Mr. FISHER said he wished to tender his resignation as secretary. (Dissent). He had held that position for fourteen years, and he thought it was time someone else had a look in. He had in his eye on one whom he thought would make a model secretary. He did not wish to sever his connection with the club, but would only be too glad to serve them in any way, The work was rather too much for him to devote the time required, and, another thing, he lived at too great a distance from the ground. A secretary should always be in touch with the Committee, and should be frequently on the ground during practice.

Turning to the report, they had had a most successful season, both as regards plans and finance. At the commencement of the season they had a book balance in hand of 18/11, really it was £9 1s. 1d. on the other side, an account of £10 being held over. That had been wiped out, and at the end of the last year there was a balance on hand £35 4s. 2d. (Applause.)

This sum, the secretary stated, will be used for payment of the ground improvements.

Coming to the last season’s performances of the teams, the first had played 22 matches, won 11, lost 4, and drawn 7, finishing third in the League. They had scored 1874 runs for 136 wickets, giving an average of nearly 14 runs per wicket, against their opponents’ 2038 for 185, an average of 11 per wicket.
They had joined the Mexboro’ and District League which was much stronger this season, the two bottom clubs having entered, viz., Stairfoot’ Rotherham, and Collegiate, and a programme of 24 League matches had been prepared. 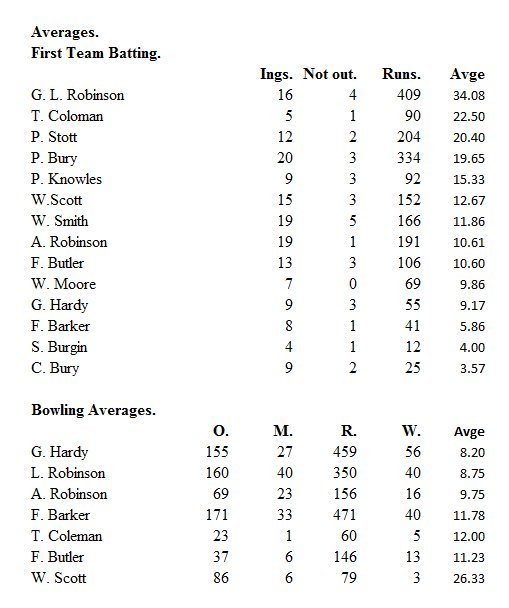 The second team had won the Doncaster and District League, which was now defunct, and had joined, for the coming season the second division of the Mexboro’ League. They had in 12 matches scored 1295 runs for 86 wickets, which averages 15 runs per wicket, whilst their opponents had scored 839 for 115, which worked out at 7.3 per wicket.

The Chairman said it was a most satisfactory report, both financially and from a playing point of view, and on being put to the members it was passed unanimously.

The Chairman asked the Secretary to reconsider his decision to resign, but to no avail. Mr. Fisher said after 14 years he wanted a spell of rest. He had great pleasure in proposing a gentleman to succeed him, one who the members could repose the strictest confidence in, knowing that no one had the welfare of the club more at heart than Mr. G. Luther Robinson. (Applause.) – Mr. Bury seconded with a few well-chosen words, and several members supported. – No other names being mentioned, Mr. G. L. Robinson was unanimously elected.

Mr. Robinson, in thanking the members, said he was not great; he would do his best to promote the interests of the club and make things pleasant for the members.