Six Denaby batsmen totalled 65 of which Williams got 43! But the tail wagged and made the aggregate more respectable. Mexboro’ did little better for they lost six wickets for 86 runs. Broadhead and Ambler were a brisk opening pair but their partnership did  not last long.

Brook had, as usual, a brief but merry innings; his 19 included a 6. For Denaby Dick Probert took 3 wickets for 48 runs. Neither side was at full strength and Mexboro’ included the seventeen-year-old Reg. Williams, who is one of the most promising of the younger school of batsmen. 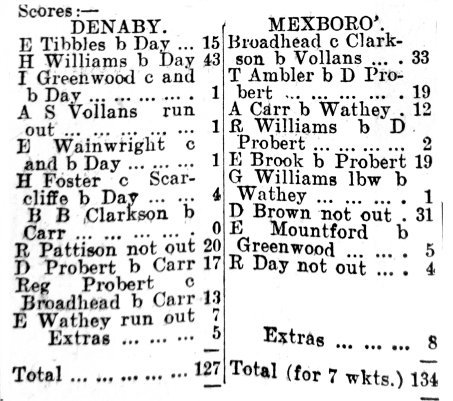