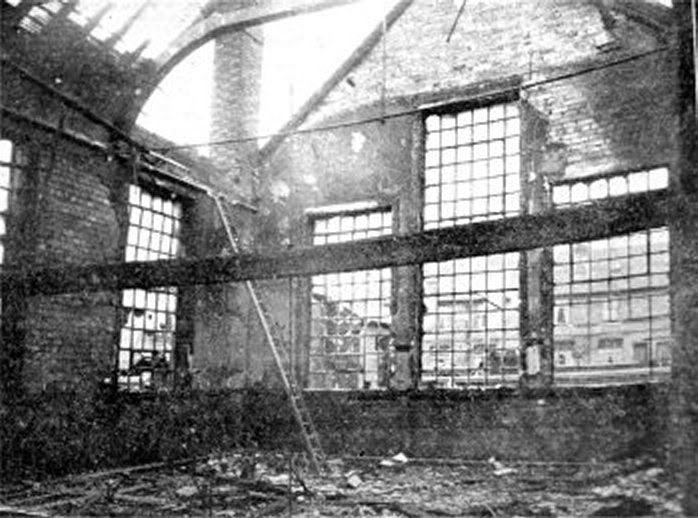 The handsome large Hall, Denaby main, one of the handsomest buildings of its kind in South Yorkshire, narrowly escaped total destruction by a fire on Tuesday evening, and, as it was, suffered considerable damage before the outbreak could be confined and finally controlled. Mr Luther Robinson, the well-known Denaby Contracter, was the first to notice anything untoward. He saw a dense volume of smoke issuing from the South West corner of the building. He entered the hall and with the temporary caretaker Mr Myers, proceeded to examine the mischief. Mr Robinson descended into the basement to the meter house, which is situated directly under the point in which the fire commenced. He cut off the gas, and reduced the risk of explosion to a minimum. The alarm was very promptly given. Mr John Soar, manager of the Denaby Co-operative Society, received information from his little daughter, Olive, and quickly telephoned Mr W.H.Chambers, managing director of the Denaby and Cadeby Collieries Ltd, who notified the Conisbrough Fire Brigade, and soon brought them to the scene of the outbreak. Mr Soar also notified the Mexborough Brigade, who arrived shortly after nine with the steamer.

in the meantime a little army of Denaby men were on the scene, working furiously at salvage. They cleared all the classrooms, some 12 in number, outside the range of the fire, and soon the fine central hall and the open space in front of the building was littered with school furniture, guests, pianos, blackboards, etc. A few things were also rescued from the classrooms which were actually being destroyed, and of all the schoolbooks and documents only two registers were lost. The Denaby Fire Brigade, an informal and imperfectly equipped organisation, was on the scene very early, and did what it could, but the men were quite unable to cope with the fire, which had apparently been smouldering for a long time, and it had now got a firm hold of the heavily timbered and plastered roof. In 20 min the classroom originally attacked, at the south-west corner (nearest to Tickhill Street) was in smouldering ruins. The walls remained intact, but the roof had come crashing in, and the room was gutted clean and bare. It was most fortunate that all the classrooms had recently been repaved with an impervious amalgam of concrete and composition. Otherwise, if the fire had eaten through the floor. and reached the meter house, Mr Robinsons promptness and presence of mind would have been of little avail. There would have been a severe explosion, and the greater part of the building would have been wrecked, and probably lives lost, for hundreds of people, workers and spectators, were crowded around the burning building.

The fire running rapidly along the roof next attacked the splendid recess, which forms a large classroom, and is occasionally used as a drawing-room recess on the occasion of dances and balls. This stage is divided from the central hall, by a huge wooden roller screen, the largest of its kind, we believe, in England. The firemen, seen that the stage was bound to go, played constantly on the screen to confine the fire, and save the central hall. In this they were successful, though, between fire and water, the valuable screen was ruined. The stage, also was practically gutted and its contents destroyed.

With the arrival of the Mexborough Brigade’s powerful steamer, the fire was quickly confined. The firemen of all three brigades stood by through the night, and at 3:30 the following morning they were called upon to check a further outbreak occurring at the seat of the original mischief.

The fire was apparently caused by a defect in the chimney of the heating apparatus. The roof timber had been smouldering for some time evidently, for the fire quickly got a firm hold. The damage caused is estimated roughly at Â£1500, and it is possible that the figure will be exceeded in repairing and restoring the destroyed wing. Altogether three classrooms have gone, for the apartment in which the fire broke out was divided by a partition which only one charred horizontal beam remains. These subdivided rooms accommodated 40 children each, and the stage, which is now in ruins, accommodated a full class of 60. These three classrooms all belong to the infant department, presided over by miss Cawton, and the temporary loss of accommodation is thus 140 places. The total combination for this department was 400, which was some 80 places short of the children on the rolls. The fire, therefore, involves a considerable educational difficulty, to overcome which the West Riding committee sanctions to the use of one of the central all classrooms purposes laugh to be obtained. There will be no school this week, but it is expected that some classrooms will be able to resume their normal occupation in a gay of two.

The damage although considerable, is trifling compared with the danger which at first threaten the building. This handsome Hall was erected by the Denaby and Cadeby Colliery Company limited in 1893. The primary purpose is educational. It was the first school in England to be erected on the central hall plan. In addition to its use as a school, however, it has generously been placed at the disposal of the people of Denaby main role cars a public, social and recreative purposes. Its stage, now lie in a heap of ruins was splendidly adapted to entertainment of every sort, and their Hall thus gave ideal accommodation for concerts, stage plays, and public meetings. The Denaby Orchestra, probably the largest and best in the district, used the hall regularly, and it was also the headquarters of several large movements in the place, notably the Denaby ambulance brigade, the second strongest in the order of St John of Jerusalem in England. I

Mr W.H.Chambers supervise the United operations of the Mexborough, Conisbrough and Denaby Fire Brigade’s, who were under the command respectively of Mr G.F.Carter, Mr W.Jones, and Mr E.Robinson.