On Saturday last the match was shot between this club and the Selby Patriotic Rifle Club, on the range of the latter. Although a little rain fell during the afternoon the conditions on the whole were very favourable, considering the time of the year.

Seven shots were fired at 200 and 500 yards, the longer range being fired first.

Team seven a side to shoot. – Six best to count.

The light got very bad before the 200 yard range was finished. The best shot of the afternoon was a “possible” by T. D. Cunningham at 500 yards the match ended in a victory for Denaby by 30 points. The club has this season shot 3 full range matches (service ammunition), and have won two of them. A highly creditable performance season seeing that they got no foliage practice, and one which speaks well for the value of miniature practice as a training in rifle shooting. The first team have also shot six miniature matches with local clubs, all of which they won, while the second team have shot two, drawn one and lost one. 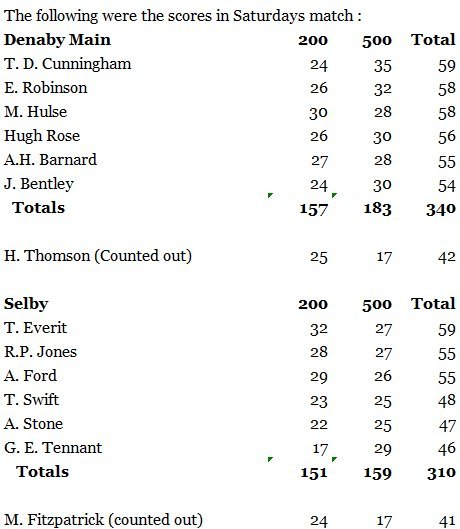 On Friday last a meeting of the committee was held to consider the advisability of opening an indoor range for winter practice. Mr. Wray had generously offered the use of his large auction room for two nights each week and it was decided to erect two targets for use with Morrisons.

A junior branch will be formed, the subscription being one shilling for the six months. No one under 15 will be admitted. The present members of the club will of course use arrange for practice but none of the first and second class members will compete against the junior members.

A prize will be given every week for the best score in the junior class, and there will be a separate handicap competition for the first and second class members, ammunition will be supplied at the rate of 3d. for 10 shots.

The range will open, it is hoped, on October 23 and every Monday and Thursday, from 6 to 9 PM members can join at the room on those nights. It is hoped that a large number of the younger men will joining every effort will be made to promote the popularity of rifle shooting in Denaby.