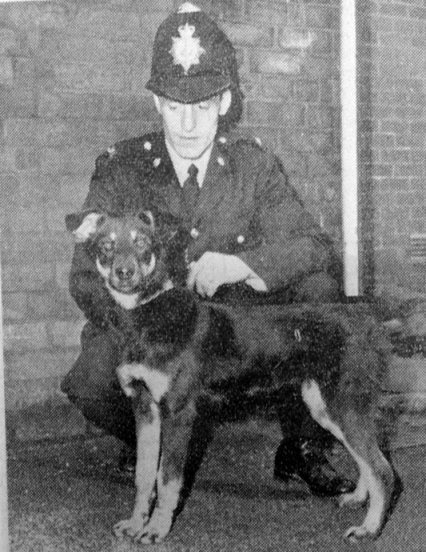 A crude attempt by someone to drown a large, black mongrel dog in the River Don on Tuesday was foiled when a young Denaby Main policeman was lowered down a difficult piece of banking to rescue the dog.

The dog was spotted in a quiet backwater of the river behind Denaby Main Colliery. It appeared to be exhausted and near to drowning, and someone had tied its legs together with a piece of wire, and also drawn a piece of wire tightly round its neck. A policeman stationed at Denaby, PC Neil Holmes and other policeman found that to rescue the dog would involve the descent of a particularly difficult piece of banking to the water.

“PC Holmes was lowered down the banking on the end of a rope,” said a policeman. “It was a difficult job and the dog took some reaching. When he was down he took the wire off the dog, which was exhausted and saturated, and it was hauled ashore.”

The police spokesman added that the dog had recovered after its ordeal and was in the police kennels at Denaby.

He said. “It looked as if the dog had been in the water for some time. It was in a position where it could have floated down the river from Mexborough. Anyway, it was a heartless and cruel thing to do.”

The police are anxious to trace anyone who knows anything about the dog or its owner.

Boy threw dog into the river